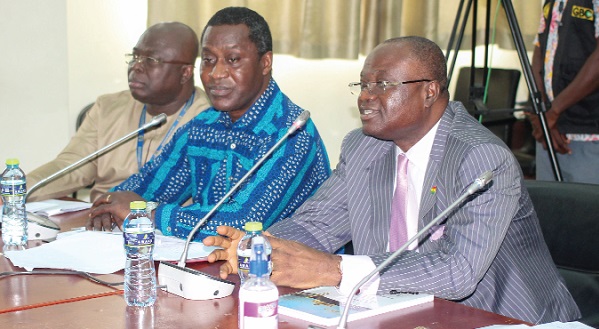 The delay in the execution of a GH¢1.4 million project has resulted in the state paying an extra GH¢6.5 million.

After awarding the contract to put up Adu Lodge in 2007 and paying 90 per cent of the contract sum, the contractor abandoned site, citing ill health. This caused the Ministry of Foreign Affairs and Regional Integration to re-evaluate the contract and award it for GH¢7.9 million in 2019.

This came up when the ministry appeared before the Public Accounts Committee (PAC) of Parliament last Friday.

This was at its sitting for the committee to consider the Report of the Auditor General on the Public Accounts of ministries, departments and agencies.

The PAC, chaired by Dr James Klutse Avedzi, therefore, charged officials of the Foreign Ministry to provide concrete reasons why the project was abandoned.

Responding to a question from the Vice-Chairman of the committee, Dr Samuel Atta Mills, on the status of Adu Lodge, the acting Chief Director of the Ministry of Foreign Affairs and Regional Integration, Ramses Cleland, said the facility was handed over to the ministry by the contractor on October 29, 2021.

That was confirmed by the auditors at the sitting.

When the Vice-Chairman asked why it had taken 13 years to complete the facility, the acting Chief Director explained that “the problem was that the contractor at some point in time was not well and that delayed the continuation of the project for a while.”

Dr Mills wondered whether the contract could not have been abrogated since the state ended up paying GH¢7.9 million for a contract that was supposed to cost GH¢1.4 million.

Explaining, the Director of Finance at the Ministry of Foreign Affairs and Regional Integration, Kingsford Amoako, said the project was awarded in 2007 but, although it was abandoned just after 2008, it was revived somewhere in 2017, hence the re-evaluation.

According to him, a contract that was awarded seven years back naturally could not go for the cost (GH¢1.4 million) it was awarded for.

Providing the history behind the long delay, Mr Amoako said the consultant was PWD Prestige, which called for its re-evaluation and that was done, leading to its resumption.

He asked whether the contract was awarded to an individual/sole proprietorship such that when the person was unwell the business suffered or to a company which would execute the contract it entered into properly.

Mr Dafeamekpor said the committee was concerned about the disparity in the original contract price as against what the state had to pay for.

Officials could not give any reason(s) why the project was abandoned shortly after being awarded. The committee, therefore, gave them a week to provide details on why it was abandoned.

Responding, Mr Cleland said in respect of the missions’ properties abroad and their use for purposes of chancery, “the properties are typically situated in prime areas of the host country which comparatively is expensive”

In order to address the problem, the sector minister had solicited a $15 million loan facility from a bank through the Ministry of Finance to renovate, build and purchase properties for the ministry.

“This was for the sole purpose of owning our accommodation and reducing the cost of rent,” he said, explaining that, it had reduced the rent costs of the ministry.

Other institutions that appeared before the committee were the Ministry of Transport, the Attorney-General’s Department, and the Scholarships Secretariat,

For his part, the Deputy Minister of Foreign Affairs and Regional Integration, Kwaku Ampratwum-Sarpong, who was at the sitting, said the government’s policy was to acquire properties for the missions, residency and chancery but the reality on the ground was that it was not easy for foreign missions to get mortgages in those countries.

He said the government was exploring a range of avenues to raise the needed funds.

Sitting was adjourned to Monday, January 30, 2023 to consider public boards and corporations.

The Chairman of the committee, Dr Avedzi said the committee would look for new dates for ministries that did not appear.

They are the Ministries of Information, Employment and Labour Relations; Education, Rural Development and Decentralisation, and Communications.

The Judicial Service is part of the institutions that are to appear before the committee.