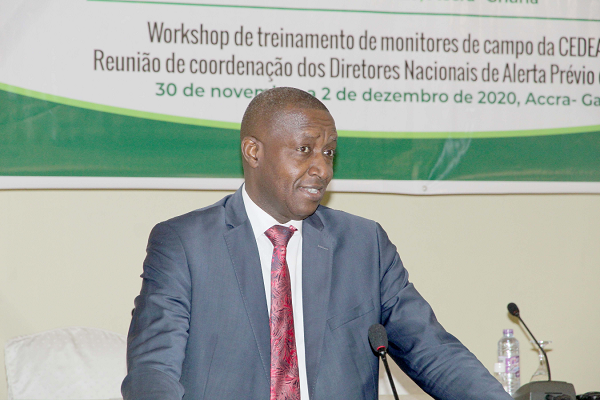 The ECOWAS Warning and Response Network (ECOWARN) has introduced a new web-based application system to enable its monitors across the member states to easily access and report incidents affecting human security in their countries.

The new web system was created based on conflict indicators in some African countries.

It is to help the ECOWARN build a trend and make predictions and projections to help the heads of state of member nations to make decisions concerning the event or incident reported by a specific country’s field monitor.

Addressing the media after a training programme to equip ECOWARN field monitors across West Africa on how the new web-based system works, the Director of Early Warning of the ECOWAS Commission, Dr Gueye Abdou Lat, stated that the field monitors were the ones in charge of data collection and dissemination of the ECOWAS early warning system.

“ECOWARN has engaged in this training for five years as it is committed to training its members to always be abreast of the technological system, and this year’s is quite different from the previous workshops because of the new system introduced,“ he stated.

Speaking on the impact the training would have on Africa, Dr Lat stated that since early warning was something the ECOWARN field members had been practising for a long time, the training was to equip them to fill the gap between early warning and early response.

He said an assessment conducted by the ECOWARN team in 2010 revealed that there was a gap between early warning and early response.

Therefore, there was the need to develop the new database web to help fill the gap, as the security system in some member states was alarming and needed an immediate solution for citizens to feel secure and safe.

“The government has a responsibility to ensure the safety and security of its citizens, and a look at some African countries and what is happening there gives a clear indication that the citizens are not safe, and so there is a need to fill the gap between early warning and early response,” he said.

Speaking to the Daily Graphic, the field monitor for Ghana, Ms Francisca Saabbah, stated that the ECOWARN had helped her in reporting human security issues, including social, economic and environmental issues.

She expressed the hope that the training would equip her to know how to channel specific information to specific offices and not to generalise it as in her earlier works.