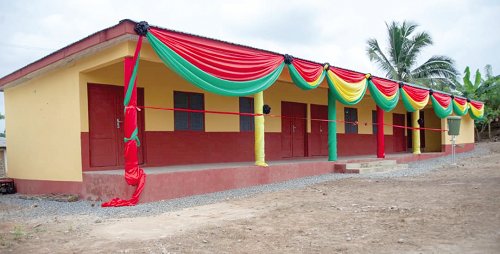 The immediate past Member of Parliament (MP) for the Prestea/ Huni-Valley Constituency, Mrs Barbara Oteng-Gyasi, has inaugurated a developmental educational project at Koduakrom in the Prestea Huni-Valley Municipality of the Western Region.

The project initiated in 2019 was constructed to replace a dilapidated KG structure which served as a classroom block.

Speaking at the event, Mrs Oteng-Gyasi noted that the President, Nana Addo Dankwa Akufo-Addo, had demonstrated utmost commitment to the provision of quality education as a means of transforming the country.

She touted the government’s social intervention policies and programmes in the education sector such as the Free Senior High School, new TVET programme, loan scheme for tertiary education and the expansion of the school feeding programme at the basic level.

She reiterated that in order for the youth to benefit from these laudable policies, it was important to ensure a strong and solid foundation for children during their formative years.

It was for this reason that during her tenure as MP, she collaborated with the municipal assembly to improve infrastructure at the basic level.

She further indicated that through her organisation, the Wassa Hemaa Foundation, an amount of GH¢20,000 was utilised to procure furniture and other learning materials to facilitate teaching and learning in the newly constructed KG block.

She was hopeful that the facility would make a positive impact in the delivery of good quality education for the children.

The Chief of Koduakrom, Nana P.J Ofie, also known as Nana Adwumapa, and his elders expressed appreciation to the former MP for providing the children of Koduakrom with such a beautiful edifice which would contribute immensely to their well-being.

They appealed to the Municipal Chief Executive (MCE), Dr Isaac Dasmani, and the assembly to provide the community with a Community-Based Health Planning and Services (CHPS) compound to facilitate access to health care.

The MCE explained that the educational infrastructure was a critical need in the municipality and lauded the former MP for her contribution towards addressing the gap.

He entreated the community to take good care of the facility and indicated that the assembly had a maintenance plan for all developmental projects as well as a monitoring team which monitored all projects in the municipality to ensure longevity.

The Municipal Education Director, Mrs Mary Vida Kwofie, praised the former MP and the MCE for the unprecedented developmental projects in the area of education such as school blocks, IT infrastructure, libraries, refurbishment of laboratories in schools, among others, through the effort of Mrs Oteng-Gyasi since 2017.

She advised parents to ensure that their children attended school as a good foundation was crucial to attaining great heights in education.