BY: Kwadwo Baffoe Donkor
Category: General News
Members of ‘We are for Ken’ after the presentation Follow @Graphicgh

A non-governmental organisation — ‘We are for Ken’ — based in Italy, has donated 50 dual desks to the Mile 14 D/A Primary School in the Amansie Central District in the Ashanti Region.

The donation followed a news item which showed the poor conditions in which the pupils study at the school with some of them sitting four per desk while others sat on stone, wood or the floor due to lack of desk.

The group, which was named after the Ghanaian politician and philanthropist, Member of Parliament for Assin South, Ken Agyapong, decided to come to the aid of the school.

The Italy branch of the NGO consulted among themselves and donated 50 desks to add up to the 40 the school has for the over 250 pupils.

The school has a population of 265 pupils with only 40 dual desks, causing congestion in the classrooms, a situation which is affecting teaching and learning.

The founder of the group, Nana Ama Amponsah Sika, said the objective of the NGO was to support Ghana's development and pledged the organisation's willingness to continue to do its best as far as the development of the country was concerned.

She said the group members were touched when they saw a photograph of Mile 14 D/A primary school pupils sitting on the floor and stones during teaching and learning hours and decided to come to their aid. 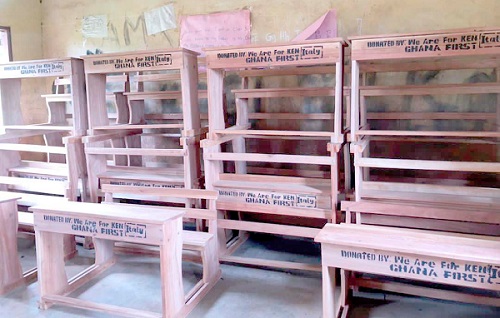 "We got only 50 dual desks to support the school and we believe it will help reduce the congestion in the school", Nana Sika said.

The headteacher of the school, Ato Ghartey Dickson, who received the desks, expressed his gratitude to the organisation for coming to the aid of the school.

He said the problem with the inadequate desks was affecting teaching and learning and expressed their delight to the organisation for the gesture, which, he said, would go a long way to ease the pressure on the existing desks and improve the teaching conditions in the school.

“The pupils are 265 but we have only 40 dual desks for all of them so you can imagine how congested the classrooms are. Sometimes, pupils have to sit on stones during teaching hours” he said.