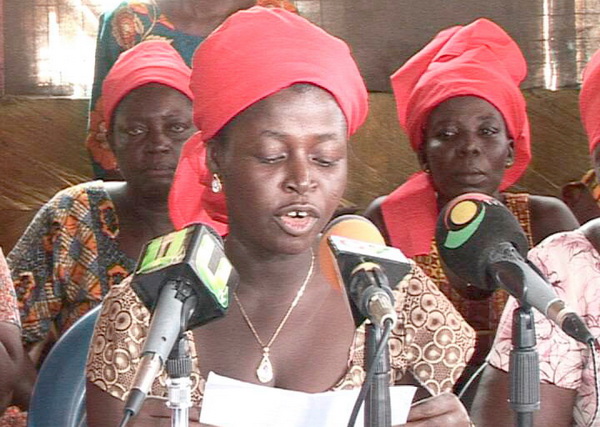 The Orange Sellers Association of Ghana (OSAG) has debunked allegations that its members are involved in the artificial colouring of oranges.

At a press conference held at Agbogbloshie in Accra on Thursday, the President of the association, Reverend Mary Owusu said no member of the association had and “will ever colour oranges or use any artificial additives to change the colour of oranges”.

Wearing red armbands and headgears, members of the association held a mini protest to indicate their displeasure at certain reports that majority of oranges on the market were coloured.

The press conference was in response to the arrest of two women by the police and officials of the Food and Drugs Authority (FDA) following a viral video that showed a woman dipping peeled oranges into a solution to alter the colour of the orange.

The two women were picked up by the authority during a swoop in the Madina Market near Accra on June 13, 2017.

Erroneous impression
Rev. Owusu explained that since the arrest of the two women, OSAG had conducted its own investigations which revealed that none of its members were involved in the alleged act.

In spite of that, she said the businesses of members of OSAG had taken a nosedive after the action by the FDA and subsequent media reports on the issue.

“This is based on an erroneous impression that our members were involved in the act. As a registered and responsible association, the negative publicity has forced members of the association to throw away thousands of oranges worth thousands of Ghana cedis due to the poor patronage,’’ she said.

Demands
Rev Owusu said since the incident, the association had made many efforts to seek clarification from FDA, but the authority was yet to update its members.

The association is, therefore, calling on the FDA to “intensify its market surveillance to flush out bad nuts.’’

Also, she asked orange sellers engaged in the colouring of oranges to stop the “unlawful act” with immediate effect.

“We also ask the police and FDA to prosecute the two persons arrested in connection (with) the illegal act.”