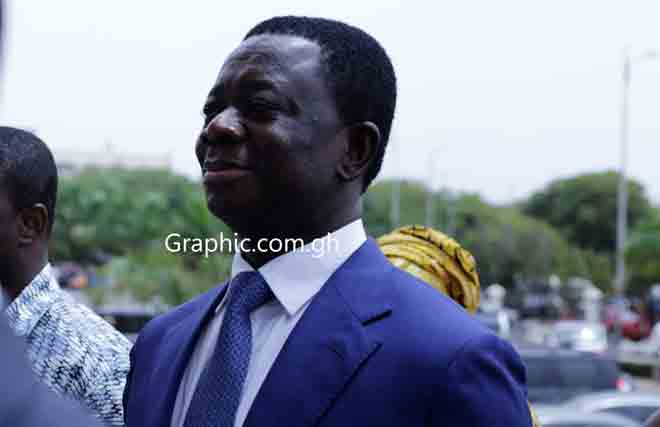 State prosecution has sought to reinforce its case that a former Chief Executive Officer (CEO) of the Ghana Cocoa Board (COCOBOD), Dr Stephen Kwabena Opuni, caused financial loss of GH¢271.3 million to the state by buying untested fertiliser for use on cocoa.

Dr Opuni and a businessman, Mr Seidu Agongo, the Chief Executive Officer of Agricult Ghana Limited, an agrochemical company, are on trial at the Accra High Court over the alleged scandal.

A prosecution witness testified last Wednesday that the fertiliser that was presented by Agricult Ghana Limited and which was tested and approved was a Lithovit Foliar Fertiliser (LFF) in powdery form, and not the liquid type that was eventually distributed to farmers.

The witness was Dr Felicia Ansah-Amprofi, the National Director of the Plant Protection Regulatory Services Directorate (PPRSD) of the Ministry of Food Agriculture, the institution mandated to regulate, implement and coordinate plant protection services in the country.

The witness insisted, however, that the fertiliser presented by Agricult Ghana Limited, and tested and approved by her outfit was powdery in nature.

The nature or form of the LFF is the major bone of contention in the trial.

It is the case of the prosecution that the fertiliser that PPRSD and other regulatory agencies such as the Cocoa Research Institute Ghana (CRIG) tested was powdery in nature, but that COCOBOD under Dr Opuni bought liquid LFF from Agricult Ghana Limited that had never been tested and approved.

Lawyers for the accused persons, on the other hand, had always maintained that the LFF that was tested was liquid in nature and not powdery.

In March 2018, the Attorney-General (A-G) charged Dr Opuni and Mr Agongo with 27 counts for engaging in illegalities that caused financial loss of GH¢271.3 million to the state, and led to the distribution of substandard fertilisers to cocoa farmers.

According to the A-G, Dr Opuni, during his tenure as COCOBOD CEO (November 2013 to January 2017), breached laid down procedures in procurement and other laws by buying the alleged untested LFF.

Agongo is accused to have used fraudulent means to sell the alleged substandard fertiliser to COCOBOD for onward distribution to cocoa farmers.

Dr Ansah-Amprofi explained that under the laws of Ghana, all fertilisers used on any crop, as well as the companies that wanted to deal in such fertilizer, had to be certified by the PPRSD.

However, she said, in addition to the certification by the PPRSD, fertilisers that were used on cocoa also had to be certified by CRIG before they could be purchased by COCOBOD.

A Principal State Attorney, Ms Stella Ohene Appiah, asked the witness the form of the fertiliser that Agricult presented, and she answered that it was powdery in nature.

During cross-examination, counsel for Dr Opuni, Mr Samuel Cudjoe, asked the witness whether she knew his client.

Samuel Cudjoe: You’ve never had any dealings with Dr Opuni?

Samuel Cudjoe: In all your dealings with this fertiliser and Agricult, you never had any contact with Dr Opuni?

Counsel then put it to the witness that what she had said meant that Dr Opuni was not in the position to know the form or nature of the fertiliser.

Dr Ansah-Amprofi responded that the fact that she had had no dealings with Dr Opuni did not mean that she could answer if the former COCOBOD boss did not know the form of the fertiliser.

The cross-examination will continue on October 14, 2020, by lawyers for Agongo at the court presided over by Justice Clemence Honyenuga, a Justice of the Supreme Court with additional duty as a High Court judge.