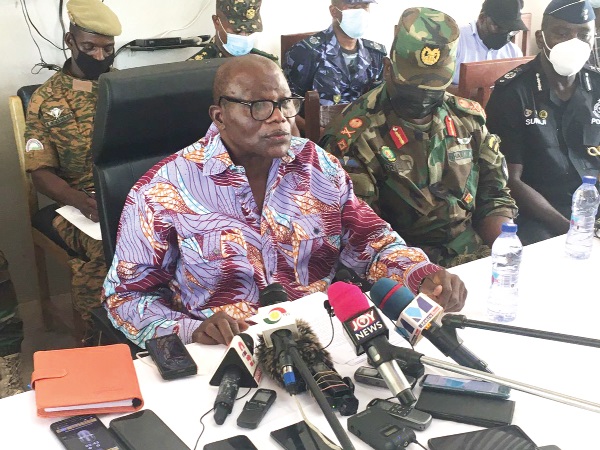 National Security has arrested 386 people, including 107 foreigners, in the five regions of the north on suspicion of being behind some criminal activities, sometimes committed in broad daylight.

One of those arrested is said to be a convict who had been jailed in the Savannah Region.

The National Security Advisor, Brigadier-General Emmanuel Okyere (retd), disclosed this at a press conference in Wa in the Upper West Region over the weekend.

The five regions where the operation was carried out were Upper West, Upper East, Savannah, Northern and North East.

Various articles, such as weapons, narcotic drugs, mining implements, contraband goods and vehicles were impounded during the swoop, he said.

He said ‘Operation Koudanlgou’, the fourth in a series, was birthed out of “the Accra Initiative”, which was signed by Ghana and the six neighbouring countries in September 2017 to jointly clamp down on all types of criminals in their various countries.

Brig. Gen. Okyere said the main objective of the Accra Initiative was to fight terrorism, cross-border organised crimes, highway robbery, trafficking of all forms, illegal mining and the maintenance of peace and harmony.

The National Security Advisor said three such operations had taken place in the various regions in May 2018, followed by subsequent ones in November 2018 and November 2019.

Brig. Gen. Okyere gave an assurance that ‘Operation Koudanlgou’, which was intelligence-led, was targeted at clamping down on organised criminal networks that had the potential to fuel terrorism and the wanton murder of innocent people in the various countries.

He indicated that it was a preemptive exercise to forestall any form of cross-border crime, such as terrorism.

He called on the public to alert the relevant security authorities to suspicious characters who might be residing with them in their various communities.

In September this year, National Security arrested 33 suspects believed to have links with terrorist organisations in Burkina Faso and Mali at Nambahala in the Savelugu municipality.

The suspects were airlifted to Accra, and after screening, 27 were freed.