One-million-dollar per constituency projects rolled out in Upper East 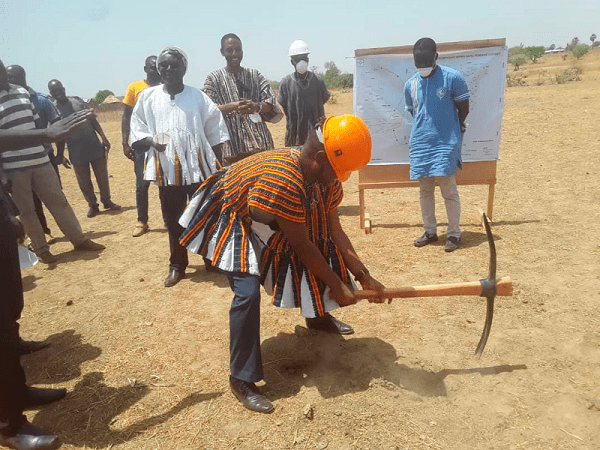 The Northern Development Authority (NDA) has cut the sod for the construction of a total of 156 projects in the Upper East Region under the one-million-dollar per constituency policy. The projects are expected to cover school infrastructure, health centres, provision of water and dams among other projects.

At the sod cutting ceremony at Tubong, a suburb of Tempane in the Upper East Region, a deputy Chief Executive Officer (CEO) of the NDA in charge of Finance and Administration, Mr Patrick Seidu, said the implementation of the projects were in fulfilment of President Nana Addo Dankwa Akufo-Addo's vision for economic and social transformation.

He added that the President, who was very desirous of pursuing policies and projects to create an optimistic, self-confident and prosperous nation, was bent on fulfilling one of his cardinal campaign promises of "one million dollars per constituency" to put to rest the anxieties and agitations of some Ghanaians.

Mr Seidu noted that the projects would also prove to skeptics that the President meant well for Ghanaians.

He further explained that the Upper East Region was going to benefit from 156 out of about 544 projects earmarked for the five regions of the north, saying the government would work assiduously to bridge the development gap between the north and the south.

"For the northern zone; that is the five northern regions, we are given about 544 projects. Upper East has 156 projects. And as we speak now, there are a lot of projects that are coming up within the Upper East Region. It includes boreholes, school furniture, CHPS compounds and the rest," Mr Seidu said.

The Member of Parliament (MP) for Tempane and Deputy Attorney-General, Mr Joseph Dindiok Kpemka, indicated that the one million dollars per constituency project which was going to be executed within the next few months was consistent with the aspirations of the suffering masses in the deprived communities which had been neglected by successful governments over the years.

About six communities; such as Tubong, Bugri, Kpikpira, Yapaala, Busum, and Teembil Gbeog are all going to benefit from the first batch of the one million dollars per constituency-sponsored projects.

The MP mentioned CHPS compounds, health centres, boreholes, water closet systems, dams, school infrastructure and dual desks among others as the projects due to be rolled out very soon in the beneficiary communities, encouraging the constituents to endeavour to cooperate with the contractors to expeditiously execute the contracts within time limits.

"When it rains here in the (Tempane district), people from some of these areas cannot go to the nearby health centres and schools because of some broken culverts and bridges. So, we are going to construct culverts at Akara Teembil, Akara Tempelig and Teembil Gbeog,” the Deputy Attorney-General added.

Mr Kpemka stressed that the 500 dual desks which were going to be procured under the project would help address the numerous educational challenges facing scores of schools in the district, as pupils in some schools lay on their bellies to write during lessons.

The issue of electricity, he added, would also be addressed under the sponsorship of the one million dollar per constituency project so that communities which had no lights would get hooked onto the national grid.

The Paramount Chief for the Sakoti Traditional Area, Naba Sigri Bewong, lauded government's commitment to repair and desilt the dam in the area to promote dry season farming and other related agricultural activities.

He said the people in the community were predominantly farmers and that if the project was thoroughly executed, it would help address the issue of the youth travelling down south in search for non-existent jobs.

The District Chief Executive (DCE) for Nabdam, Ms Agnes Namoo, for her part, said the President of the nation deserved all the praises for fulfilling almost every single promise made to Ghanaians in the run-up to the 2016 elections.

She said the sod-cutting ceremony was a restoration of hope for the people in the area, mentioning that about 20 boreholes would be drilled under the one million dollar per constituency project in the district. Communities such as Nangodi, Kong-Daborin, Ziemboug, Yakoti, Pelungu, Zoogo, among others in the district would benefit from the project.

At Sakoti in the Nabdam District, the sod was cut for the reconstruction of a dam to promote an all-year-round dry season farming.