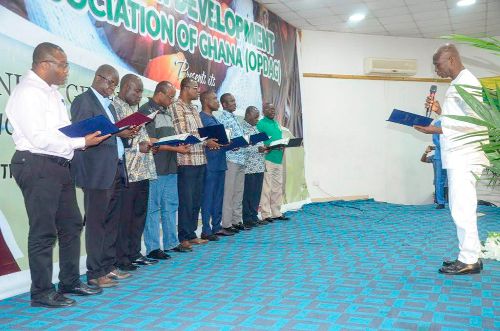 The new executive taking the oath of office
30.5k Shares

The Oil Palm Development Association of Ghana (OPDAG) has lauded the Agriculture Technical Vocational Education and Training (ATVET) project as a good initiative to get the youth into agribusiness.

The President of OPDAG, Mr Samuel Avaala, said currently, youth unemployment was a challenge and that the agricultural value chain, especially in the oil palm sector, involved a lot of processes from the planting and harvesting to processing and transporting which the youth could take advantage of.

“Through the ATVET, young people will also be trained in oil palm so they can take certain part of the value chain as their businesses. Those with some agric knowledge and those with none will all be trained because plantation work itself requires different skills at different stages and people can take those as their core areas,” he said in an interview during the national oil palm stakeholder’s forum in Accra.

The Council of Technical Vocational Education and Training (COTVET) is spearheading the (ATVET) project, incorporated by the Ghana National Medium-term Agriculture Sector Investment Plan (METASIP II), to ensure adequate attention on the agric sector at the national level.

He said “the ATVET will come with avenues and opportunities for jobs and economic development”.

The forum was held alongside the association’s annual general meeting which was dubbed “Oil Palm; Agenda for Growth and Jobs Creation”.

It was attended by members of OPDAG in the Eastern, Western, Central, Lower Volta and Ashanti regions, and other stakeholders in the oil palm value chain.

The OPDAG is a private sector industry association with the mandate to promote socially responsible and ecologically and economically sustainable production, value addition and consumption of palm oil products in Ghana.

It has objectives to, among others, bring all stakeholders in the oil palm sector together, promote sustainable growth and development and to push for the institutionalisation of a fair and transparent pricing mechanism for fresh fruit bunch, crude palm oil and other related oil palm products for the industry.

As part of the AGM, an election was held and new executive was elected to steer the affairs of the association over the next four years.

Mr Samuel Avaala maintained his position as the President after the elections.

Mr Horatio Pitcher was elected Treasurer, while the Executive Secretary of the Association is now Mr Selorm Quame.