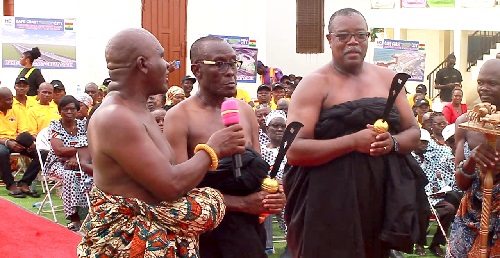 Mr Samuel Aduama, the General Manager of the Ridge Royal Hotel, was also enstooled alongside as the Nkosohen.

The chieftaincy roles have been conferred on the two distinguished personalities for their immense contributions to the development of Cape Coast in the areas of education, health, tourism, hospitality among others.

Mamdev Ghana Limited is among other things executing a $10-billion smart city project to transform the ancient city of Cape Coast into a model world-class city to boost tourism.

Mr Mamphey’s company has also been the strategic sponsor of the Oguaa Fetu Afahye on several occasions and is supporting the infrastructural and academic development of selected Senior High Schools (SHSs) in Cape Coast.

Mr Aduama on the other hand, through his hotel, has been instrumental in the hospitality industry and other areas of growth.

Draped in black traditional cloths and slippers, the new chiefs were led by the linguist, Okyeame Benya, to swear an oath of allegiance before the Traditional Council in line with the customs and traditions of the people.

Osabarimba Kwesi Atta noted that the honour done the businessmen was in recognition and appreciation of their commitment and urged them to work even harder to justify their enstoolment.

“However, be careful of your steps. We have our norms and so if you bring disgrace to the position, you will be summoned and punished,” he cautioned.

The Traditional Council at the culture-rich ceremony also elevated some three chiefs for their hard work over the years.

Nana Kojo Addae I, the Chief of Abura, was made the Guantuahen of the Traditional Area; while Nana Egyirba, the Queenmother of Amoyaw, was elevated to the position of Apagyahemaa.

Nana Kweku Enu III, the Chief of Apewosika Kokwado, was also honoured with a new title as the Mawerehen for his dedication and hard work.

In the same way, Nana Amba Ayiaba I, the Krontihemaa of the Oguaa Traditional Area; Mr Perry Mensah, a three-time chairman of the Oguaa Fetu Afahye Planning Committee, and Dr James Orleans-Lindsay, a businessman, were awarded for their diverse contributions to the development of Cape Coast

Nana Amba Ayiaba, speaking on behalf of the awardees, expressed appreciation to the council for recognising their efforts.

“A nation that does not honour its heroes is not worth dying for; thank you very much for remembering us. For us, this is a challenge to do more,” she said.

In an interview with the Ghana News Agency after his enstoolment, Mr Mamphey stressed that the development of the Central Region was a shared responsibility among the government, the traditional councils and the private sector.

He said the region was too endowed to be underdeveloped, reiterating his commitment to lead the charge as an Mputuhen to drive the region to its deserving status.

“For us at Mamdev, we have made it a core vision and responsibility to make Cape Coast and the entire Central Region a booming and thriving enclave, especially in tourism and education and we will not relent until it happens,” he said.

He thanked the Oguaamanhen and the entire Traditional Council for honouring him.

For his part, Mr Aduama indicated that he was astonished and humbled by the conferment because he was not aware his good deeds were being closely monitored.

Mr Aduama further called on all businesses to support the development agenda of Cape Coast, stressing that “if Cape Coast grows, our businesses will also grow”. — GNA