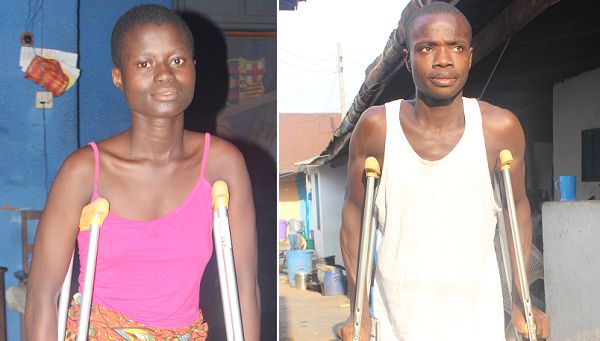 The 23-year-old man who was shot during a demonstration over exorbitant electricity bills in Odumase-Krobo in the Eastern Region died from a gunshot fired at close range, an autopsy report has said.

The report, dated May 25, 2019 and signed by Chief Superintendent Dr O. Owusu Afriyie of the Police Hospital, showed that the man, Thomas Partey, died from severe chest injury and haemorrhagic shock.

Police accused
While residents and survivors accused the police of shooting Mr Partey and seven others, including an 18-year-old student of the Odumase-Krobo Anglican Junior High School (JHS), Ms Ruth Mankattah, and a 41-year-old farmer, Mr Kortey Tetteh, the police, in a post-incident report, denied shooting the victims and said they only fired warning shots.

Ms Mankattah was preparing to write the 2019 Basic Education Certificate Examination (BECE) last month when the incident, which resulted in the amputation of her right leg, occurred.

The bullet penetrated her right knee, while the left leg suffered a minor injury from another bullet.

Narrating chilling accounts of the incident, Ms Mankattah said she was shot by a senior police officer whom she could identify.

According to her, she was on her way to the market when she was caught up in the melee.

She said the policeman aimed the gun at her from less than 20 metres and fired.

“I can identify him. He used a pistol. He pointed it at me and fired,” Ms Mankattah told the Daily Graphic, and added that when she fell after the bullet had hit her, the policeman appeared shocked and thought she was dead.

Ms Mankattah’s account was similar to Mr Tetteh’s, who said he was among onlookers when the police began to fire indiscriminately, for which reason he and others ran away from the main road.

With his right thigh framed in Plaster of Paris (POP), he said policemen aimed guns at him and other people.

“We were standing there when a bullet hit a young lady and she fell, so we took to our heels. But a policeman aimed a gun at us and fired.

It hit my thigh,” he said, wincing in pain.

He said he was rushed to hospital, where doctors confirmed that it was a shot from a gun.

In crutches and grimacing in pain, he said the bullet missed his genitals by a hair’s breadth.

He also indicated that he could identify the policeman who shot him.

However, an extract from a provisional police report on the incident, dated July 10, 2019, a copy of which the Daily Graphic has, absolved the police of any wrongdoing.

Titled: ‘Police investigative report on the death of Thomas Partey on May 22, 2019’, it was addressed to the late Partey’s father, Mr Wilfred Sam Partey.

According to the report, on the day of the incident, the police received information around 1 p.m. that the chiefs and some elders of Manya Kpongunor and Sokwenya, suburbs of Odumase-Krobo, had organised the youth and were proceeding to the Lower Manya Municipal Assembly to cause damage and also set the assembly, the police station and the Manya Krobo Chief’s Palace ablaze and kill the municipal chief executive for not helping to solve the electricity problem between them and the Power Distribution Services (PDS).

It said on receipt of the information, the police immediately mobilised and proceeded to the assembly.

“While there, the police saw a crowd of irate youth, numbering about 1,000, including chiefs and elders, marching towards the municipal assembly premises, wearing red banners on their heads, threatening, chanting and singing, forcing to enter the assembly premises.

“The police tried several times preventing the youth from entering the assembly premises but they resisted and rather attacked the police by throwing stones, bottles and other dangerous objects at the police, with others armed with machetes and knives advancing fiercely, threatening life and property, amidst the firing of guns.

“In the process, the police also fired warning shots to disperse them but they refused to retreat and were still firing. Later, it was detected that a man, aged about 23 years, who was among the protestors, sustained serious injuries in the chest. But the name of the victim was not immediately known,” the report, signed by Supt Michael H. Addae  said.

It said the police could not immediately tell the cause of the injury.

“He was, however, rushed to the St Martin De-Porres Hospital at Agormenya for treatment but he was pronounced dead on arrival. The body of the deceased was deposited at the same hospital for preservation, identification and autopsy,” it added.

It said the following day, the deceased’s father went to the police station to report that he had information that on May 22, 2019, someone had been shot and that his son left home on the same day and had since not returned.

The report said the police then led the complainant to the hospital, where he identified the deceased as his son.

But speaking to the Daily Graphic, the Divisional Chief of Dorm, Nene Bediako Muala III, discredited claims that he had led the youth to the assembly to cause mayhem.

He also debunked allegations that 1,000 young people invaded the assembly premises and tried to force their way into the assembly building.

While admitting that some young people went to the assembly playing drums, he said he did not lead them there, neither did they carry guns or any offensive weapons, as contained in the report.

“I asked the young people who had blocked the road while I was in a bus with my elders to go home, since I was going to engage the MCE on the issue and get the PDS to restore power. When we got there, the police insisted we couldn’t park near the assembly. We were about seven people in the bus.

“We were told that the MCE was not around and it was even the Police Commander, Mr Selormey, who gave me his phone to speak to the MCE,” he said.

He also admitted that while he was at the assembly, some residents of the area who were in their homes had thrown stones at the police.

He said because those throwing the stones were not visible, the police went after the drummers, while firing warning shots, adding that at no point did the drummers react to the police gunshots.

Meanwhile, a trend analysis of crowd control by the Ghana Police since 1997 shows that in almost all instances, protestors and rioters either die or get injured from gunshots.

In April 2001, the then Inspector General of Police, Mr Ernest Owusu-Poku, issued a directive against the use of warning shots by the police, saying that it was not authorised by police regulations.

When contacted, the Eastern Regional Police Public Relations Officer, said while the police report given to Mr Partey did not include the result of a ballistic examination to determine the source of the bullets that killed his son Thomas and injured the others, Mr Tetteh said the report was a provisional one as investigations were still ongoing and the final report would capture those details.

On accusations that the police aimed the guns at the victims and shot them, he said it was an allegation that was still being investigated and added that while the police were doing the criminal investigations, the victims were at liberty to go to court, prove their case and ask for damages as currently, the allegations remained their words against that of the police officers. 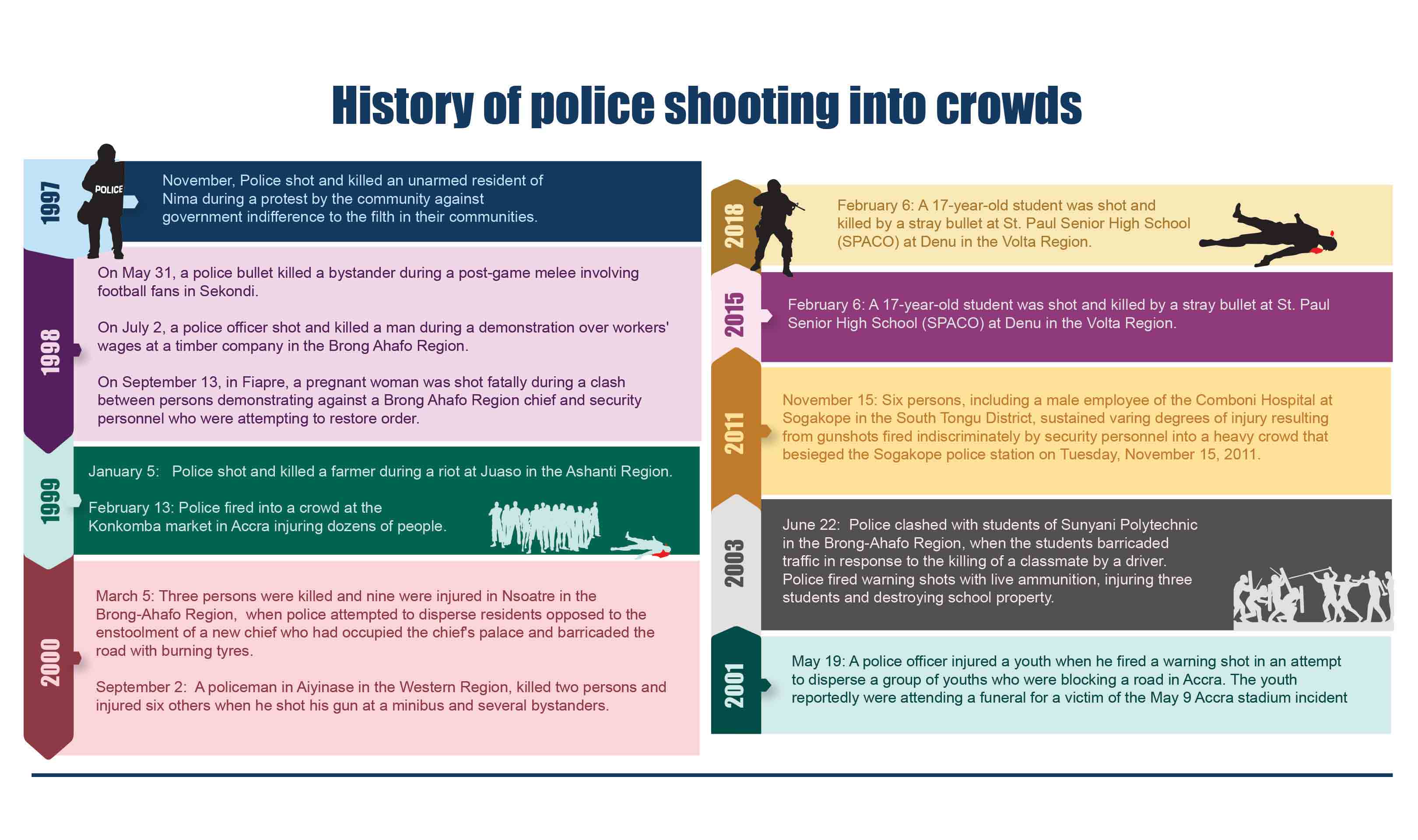