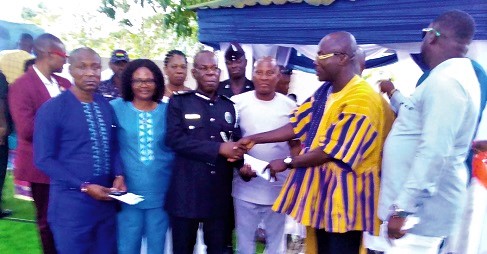 The Oda Divisional Police Commander, Deputy Commissioner of Police (DCOP) Fleance Senam Adikah, has expressed concern about the protracted chieftaincy disputes in the Akyem Kotoku Traditional Area which has divided the people, and also hindered the development of the area.

He has, therefore, made a passionate appeal to the influential people from the area to take realistic measures to resolve the litigation to promote peace, unity, stability and accelerated progress.

Mr Adikah made the appeal at a ceremony at Akyem Oda last Friday to celebrate his promotion from Assistant Commissioner of Police (ACP) to DCOP, which coincided with his retirement from the Ghana Police Service after 34 years of dedicated service to the nation.

Mr Adikah stressed that the current judicial delivery system in the country was unfair to victims of crime and appealed to Parliament to pass a legislation to review it to benefit crime victims.

According to him, in spite of the fact that the police struggled to help and support the victims of crime to get justice, they hardly benefitted from the system, adding that the state rather benefitted at the expense of the victims.

He cited a case of causing harm when an accused person used a blade to open a deep cut on the face of a victim and when the accused was arrested, put before court and jailed five years in hard labour, the victim was left to her fate without receiving anything to settle her medical bills and transport expenses.

The Divisional Commander advised the general public to provide the police with logistic support to enhance their work and vital information leading to the arrest and prosecution of criminals.

He announced that the current IGP was introducing an enhanced visibility and community policing strategy where the police presence would be well felt in the communities, and appealed to the public to embrace and be ready to support it.

Mr Adikah enjoined the public not to worry the police with bribes, neither should they attack them with a claim that they had offended them, adding that they must use the law in dealing with police misconduct by reporting them to their senior officers.

He also admonished police personnel to be disciplined and conduct their duties professionally, stressing that they should not intimidate the public with their uniforms.

Mr Adikah used the occasion to apologise to all those he offended in the discharge of his official duties and urged them to forgive and forget.