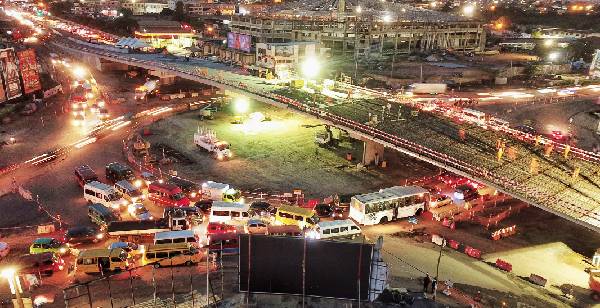 The first tier of the Obetsebi Lamptey Interchange will be opened to vehicular traffic next month.

It is expected to ease traffic congestion around the roundabout significantly, particularly during the rush hours.

Ahead of today’s inspection of the progress of the construction by the President, the Minister of Roads and Highways, Mr. Kwasi Amoako Atta, toured the site last week and expressed satisfaction with the overall work on the interchange.

He told journalists that the entire construction work was expected to be completed in June 2021, and that the work was running smoothly, in spite of challenges imposed on different facets of the work by the COVID-19 pandemic.

He expressed the hope that the opening of the first tier would ease traffic flow considerably on the corridors that link Kaneshie and Graphic Road, and then the Kwame Nkrumah Circle and Abossey Okai.

Work in progress from Graphic Road towards the Kaneshie Market

The first phase of the $35 million project consists of a two-tier interchange with complementary storm drains and culverts, and will link the Kaneshie Market to the central business district of Accra, and through a loop to the Kwame Nkrumah Circle Interchange area.

The construction site has been a busy zone over the last few months, with workers engaged day and night across the week to meet the construction timelines.

Last week, for instance, a portion of the road network around the construction area was closed to traffic to enable workers to lay the prefabricated decks that links the Graphic Road to the Kaneshie highway.

Last Sunday, the route from the roundabout to the Kwame Nkrumah Circle Interchange was also temporarily closed to traffic for a similar exercise.

This has resulted in a heavy traffic jam on routes towards the area and the attendant inconvenience to motorists and commuters.

The Resident Engineer in charge of consultancy, Mr. Owusu Sekyere Antwi, said concrete columns, piers and a super structure made up of seal with concrete were being laid to make way for work on the deck and asphalting of the surface.

He said the first phase was also expected to improve the flow of water into the Odaw River to reduce flooding at areas upstream.

The second phase involves the widening of the road into a three-lane dual carriageway, with provision for bus rapid transit facilities.

It will also see the widening of the Awudome Cemetery and Nii Teiko Din roads into dual carriage lanes, as well as improvement of the Kaneshie Market Terminal.

The ground level will have re-modelled roundabout while the second tier will be an east to west flyover linking the Graphic Road to the Kaneshie-Mallam road.

The third tier will be a north-south flyover on the Ring Road West, which will link the Ring Road from the RoyalHouse Chapel to the Central Mosque at Abossey Okai.

The contract for the design and the construction of the interchange and other ancillary works was signed in October 2016.