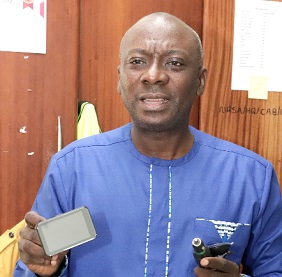 The National Road Safety Authority (NRSA) has started the installation of traffic monitoring cameras on its fleet of vehicles as it steps up its activities on the roads.

The cameras are to enable the authority to record behaviours on the roads for the appropriate action, including possibly reporting road traffic offenders to the police.

“Now, anywhere we move, this camera will be able to identify everybody who will be within the road space — drivers, motorcyclists, pedestrians and so on,” the acting Chief Executive Officer of the NRSA, David Adonteng, told the Daily Graphic.

He explained that the videos would also help to unravel what happened in the event of a road crash.

“We can replay it to know when it happened, who was involved, and how it happened, and then we push everything to the police.

“Wherever you are, we will get you because the Driver and Vehicle Licensing Authority (DVLA) has records of every motor rider and vehicle in its system. So when it picks your motorcycle or vehicle registration number, then we would use that to follow you wherever you are to redeem yourself at the law courts,” he said.

At least 1,300 people died in 7,687 reported road crashes between January and June this year, statistics from the NRSA have shown.

Another 7,997 people sustained varying degrees of injury in the reported crashes, which involved 13,248 vehicles.

The NRSA statistics further showed that within the same period, 1,356 pedestrians were knocked down.

The mid-year statistics indicate an improvement in the road safety situation, compared with the same period last year, when 1,454 people were killed in 8,188 reported crashes.

Mr Adonteng noted that with the cameras, the authority would be very strict on enforcement.

“I think by September we should have all our vehicles installed with this camera. For now, however, we are doing the testing with a few,” he said.

A road safety information centre, he said, had been established, which would gather and coordinate information from the videos and link them to the police system.

“You know we don’t have the mandate to arrest people individually, and so whatever observation we do, we have to follow it up at the police service. So we would package everything to the police and then they would go and apprehend and do the prosecution,” he said.

Mr Adonteng said the use of the cameras was the order of the day.

“We are in a digitisation period, and so we want to move away a little from the manual way of interaction into digitisation so that we are not left behind.

“The fight against road crashes has now gone through a different level, and so we should also lift our game to get ourselves into the digitisation world and deal with the situation accordingly,” he emphasised.