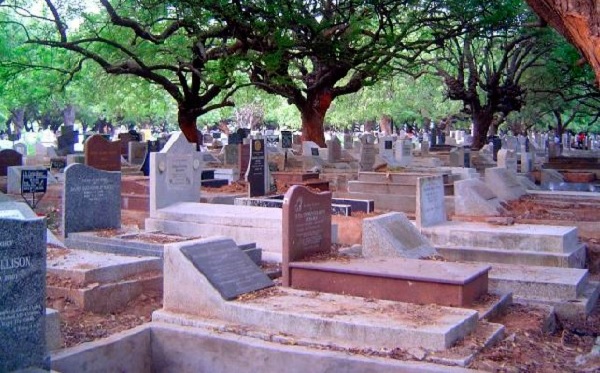 The Shai-Osudoku District Assembly’s bye-law is to ensure that families observe the COVID-19 protocols at the cemetery
30.5k Shares

Due to non-compliance with the COVID-19 protocols during burials, the Shai-Osudoku District Assembly has instructed families to ensure they obtain appropriate permits before they bury their loved ones.

The assembly wants to prevent the likely spread of the disease as a result of non-compliance.

According to the assembly, those who failed to abide by this bye-law will be sanctioned accordingly.

The sanctions include a fine of not less than 250 penalty units or imprisonment of not less than six months or both in case of continuing offence as stipulated by the bye-laws of the assembly.

Even though these bye-laws already exist, the assembly in the Greater Accra Region has embarked on its strict enforcement as a result of the COVID-19 pandemic.

The assembly wants to ensure compliance with section 18 (7) of the Shai-Osudoku 2020 District Bye-laws on burial permit.

In a letter written and signed by the District Coordinating Director, Mr Frederick Akitty, on behalf of the District Chief Executive (DCE) to the Presidents of the Osudoku Traditional Council, Shai Traditional Council, assembly members in the district and copied to the district commanders of the Ghana Police Service at Dodowa, Doryumu, Akuse, Afienya and the District Environmental Health Officer, which The Mirror accessed, the assembly stressed the need for all families to adhere to the law.

Part of the letter read, “It is an offence to bury a deceased person in the district without obtaining an approved permit issued by the Assembly’s Environmental Health Unit.”

Punishment
“I am by this letter reminding all the traditional councils and the assembly members in the district that the burial permit bye-laws are still in force and that community members must be guided and act accordingly in order not to have any confrontation with the assembly in that regard,” the letter stated.

The letter, has, therefore, authorised and mandated assembly members and town and area councils to demand and inspect authentic burial permits issued by the district assembly through the environmental officer from the family head before the burials in the public cemeteries, private homes and stool cemeteries in the district.

According to the Environment Health Officer of the Shai-Osudoku District Assembly, Ms Agnes Maku Korletey, even though the births and deaths registry department of the assembly collects an amount of money per burial of a deceased, her department had also adopted the strategy to educate the general public on the strict observance of COVID-19 protocols at burials as announced by the President in his address to the nation.

She emphasised that the strategy and education was yielding results in most parts of the district.

All efforts to get the officer in charge of the birth and death registry of the assembly to state revenue generated so far within this COVID-19 period did not yield any result.

COVID-19 education
At an emergency Osudoku Traditional Council meeting held at Osuwem last Saturday, the Paramount Chief of the Osudoku Traditional Area, Nene Aadegbor Ngmogmowuyaa Kwesi Animle VI, who is also the acting President of the Greater Accra Regional House of Chiefs, assured the assembly that his traditional council would ensure that all the people in the traditional area complied with the order, adding “we are not in normal times and we need to adhere to the assembly’s orders”.

Nene Animle, who educated his traditional area on COVID-19 and its implication on the area and the nation as a whole, stressed the need for his people to strictly observe the COVID-19 protocols in their own interest.

To demonstrate his loyalty to the COVID-19 safety protocols, Nene Animle ensured that all those who attended the meeting without the masks were served with the masks before they took part in the meeting.

He said the COVID-19 pandemic was deadly and nobody should take it for granted.

The President of the traditional council tasked his divisional chiefs, the sub-chiefs, as well as opinion leaders in the traditional area to assist the assembly’s mandated officers in enforcing the safety protocols within their jurisdictions.

Court suit
Nene Animle briefed the traditional council on the outcome of the court suit against him, the Paramount Chief and the Osudoku Traditional Council at the Tema High Court by some members of the Osudoku State.

He explained that notice of discontinuance filed by the lawyers of the plaintiffs was granted and GH¢2,000 cost awarded against the plaintiffs.

Nene Animle said they were one people and it was not necessary to be litigating in court and therefore advised people who were peeved and aggrieved about any issue in the traditional area to remain calm and seek redress from the traditional council rather than go to the law courts.