No jurors to decide fate of ‘coup plotters’ 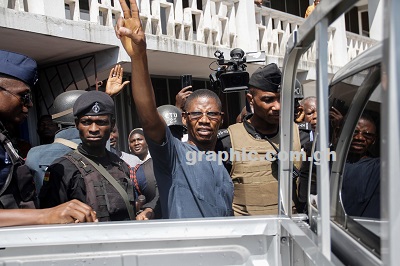 There are not enough jurors to decide the fate of the 10 persons accused of plotting to destabilise the country and possibly overthrow the government.

In view of that, the Accra High Court yesterday adjourned the trial to November 20, this year in expectation that the required pool of jurors will be available from which seven will be selected for the trial.

The seven-member jury was expected to be empanelled yesterday but the presiding judge announced that the jurors were not available.

Justice Samuel Asiedu said letters had been sent to institutions and organisations to make their members available for juror duties and those institutions were now responding.

“I will get the registrar to get the members ready for the jury to be empanelled,” he said, and subsequently adjourned the trial to November 20.

Col Gameli and ACP Dr. Agordzo have pleaded not guilty to abetment to treason felony.

Prosecutors have accused the 10 of being part of a group known as TAG, a non-governmental organisation (NGO) which is alleged to have planned to embark on demonstrations against the government and “possibly take over the government”.

It is also the case of the prosecution that a map found in the possession of the accused persons showed some important state installations, such as the Jubilee House, the Ghana Broadcasting Corporation (GBC), Burma Camp, the 37 Military Hospital and the National Police Training School, which it had targeted.

“Again, there were discussions on whether or not to kill the President in the process of overthrowing the government,” it added.

The prosecution added that in June 2018, the security agencies picked up intelligence that the accused persons, under the auspices of TAG, had planned to overthrow and take over the government.

According to the prosecution, Col. Gameli recruited Zikpi, who was a signal specialist with the GAF, to help jam the radio signals of the National Communications Authority.

TAG, it said, planned to jam all radio stations, with the exception of the Ghana Broadcasting Corporation.

The prosecution said in furtherance of the plot, Dr. Mac-Palm invited Kafui, who was a blacksmith at Alavanyo, to Accra to manufacture explosives and pistols for the group.

With regard to ACP Dr. Agordzo, the prosecution said he donated GH¢2,000 to TAG to aid its cause and also drafted a speech for Dr. Mac-Palm to be read at the planned demonstration by TAG.