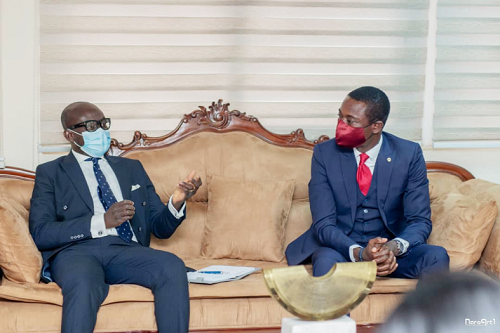 The Attorney-General and Minister of Justice, Mr Godfred Yeboah Dame, has pledged non-interference and cooperation towards the Special Prosecutor (SP), Mr Kissi Agyebeng.

“I pledge to you my intention not to interfere with your work and I will not do that at all. I recognise your independence and I will make sure all the help you require is given to you; from recruitment of competent personnel to budgetary allocation,” Mr Dame said.

He made the pledge at a meeting between the two offices yesterday.

Mr Agyebeng, who is barely a month-old in office, met with the A-G to discuss and identify areas of cooperation and assistance.

The Office of the Special Prosecutor is mandated by law to cooperate and coordinate with the Attorney General (A-G) and other state agencies in the performance of its work.

The A-G also noted that the fight against corruption was an uphill task but stressed that with the right attitude and approach, it could be achieved.

The minister praised Mr Agyebeng as possessing the qualities needed to fight corruption.

Mr Dame also commended President Nana Addo Dankwa Akufo-Addo for setting up the Office of the Special Prosecutor, citing it as one bold initiative in the history of the country in fighting corruption devoid of influences and personalisation.

The Special Prosecutor, for his part, noted that he was beginning the office anew.

Mr Agyebeng further stated plans to recruit about 250 staff by the end of January next year.

The SP was particularly concerned about salary levels of staff of the office, and called for the situation to be dramatically upgraded, saying “you can’t fight corruption with poorly paid staff and staff on secondments; it will be a lost battle”.