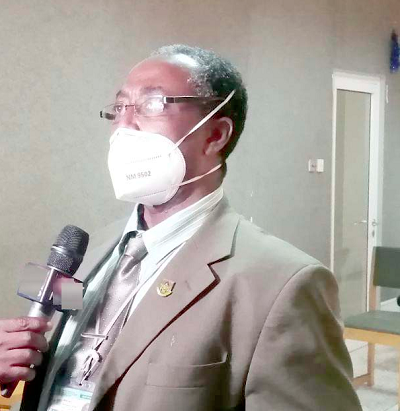 The Head of Child Health at the Komfo Anokye Teaching Hospital (KATH), Prof. Sampson Antwi, has warned the public and nursing mothers in particular, to be extra careful and observe the COVID-19 safety protocols to prevent their children from getting infected.

He said the children’s treatment centre at the hospital was currently full to capacity and holding centres had also now been turned into treatment centres due to the upsurge in COVID-19 cases.

Prof. Antwi said as of Tuesday, January 26, the Child Health Directorate had recorded nine positive cases of COVID-19 with one of them succumbing to the disease.

He said the youngest of those infected was an 11 day-old baby and that all the cases were recorded within a spate of two weeks.

Prof. Antwi, who was addressing the media in Kumasi, described the situation as very worrying, especially when the institution was running out of space for admissions.

He has appealed to the public to abide by the protocols as has been recommended by the Ministry of Health.

He said it was very important that the public heeded the advice since the new strain of the virus was deadlier than the old one.

The Head of Child Health at KATH said further that at the peak of the outbreak of the disease between March and December last year, the child health department recorded 14 positive cases of the disease.

At present, he said, the department was unable to admit new cases until those on admission had been discharged.

But that notwithstanding, he said, the department was still attending to COVID-19 cases and “we make sure that patients are stable before we discharge them”.

He dismissed assertions that the directorate had run out of protective gear, had stopped screening patients and was admitting both ‘normal’ and COVID-19 patients in the same ward.

He said since the pandemic broke, each department and unit at the hospital had put in place a COVID-19 management team to handle cases that were presented.

Besides, he added, all visitors and staff were made to wash their hands and their temperatures checked before they were allowed into their departments and units.

“These are done as part of the COVID-19 protocols established by the hospital,” Prof. Antwi said.

He admitted all the same that when cases declined, the adherence to the protocols was relaxed but said ever since the sudden rise in cases, commitment to the protocols had been revived and were being strictly enforced.

Prof. Antwi said considering the challenge the department was having with space to admit more children for treatment, it was unable to ensure social distancing among family members or helpers taking care of the children.

“Although we have been able to create spaces between the beds in conformity with the social distancing rule, we are, however, unable to do so for parents attending to their children and the children move about freely and interact with one other. We are unable to restrict them,” he said.

With regards to the COVID-19 situation at the hospital generally, the Medical Director of KATH, Prof. Baafuor Kofi Opoku, said the hospital was unable to admit any more cases that were positive.

He said all 23 beds at the hospital’s treatment centre were full “and we have some patients even at the holding area who have tested positive and are waiting to be transferred to the treatment centre”.

He said as of last Tuesday, out of 504 samples sent for testing,  251 had tested positive indicating a positivity rate of 49.8 per cent”.

Prof. Opoku, thus, reiterated the appeal made to the public to observe the safety protocols and to avoid crowded places.