NGO initiates project to get girls back to school 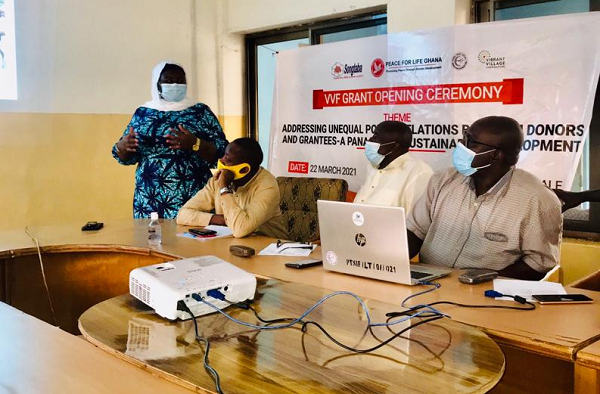 Hajia Lamnatu Adam ( standing) , Executive Director of Songtaba making a presentation on their activities at the launch. Picture three shows a group picture of the partner NGOs and Mr Osman Mohammed, the Country Programme Director for VVF and some beneficiaries of the partner organisations projects after the launch.
30.5k Shares

Songtaba, a women and children's rights organisation is to embark on community sensitization programme to create awareness on the re-entry policy for girls education developed by the Ghana Education Service (GES).

The policy seeks to allow girls who have dropped out of school due to pregnancy to return to school after delivery to complete their education.

The initiative, according to the organisation, is to increase enrollment of girls back to school following the reopening of school in January this year. Schools were closed in March last year following the outbreak of COVID-19 in Ghana.

The Executive Director of Songtaba, Hajia Lamnatu Adam disclosed this when she presented the activities that her organisation was undertaking to promote girls education in the Northern Region at the launch of a grant funding by the Vibrant Village Foundation (VVF) in Tamale on Monday, March 22,2021 to support three non-governmental organisations (NGOs) working in Northern Ghana.

The grant is to support the three NGOs who are working in the various thematic areas including, but not limited to food security, livelihoods and financial wellbeing, family health, education, gender and child protection in communities across Northern Ghana.

Hajia Lamnatu said statistics released by the GES indicated an increased number of girls who might not return back to school after COVID-19 due to teenage pregnancy and other factors when schools resumed in January 2021.

That, she said was evident in the 421 final year Junior High School (JHS) girls who could not return to take part in the final year examination.

"Songtaba has therefore identified this area as a great concern that need to be addressed by Stakeholders in the education sector", she stated.

She said her outfit shall focus its attention on the re-entry policy for girls of GES to sensitize communities in their operational areas, especially the Northern Region to get girls back to school.

She added that her organisation would also work closely with the GES to identify districts and schools with high attrition rate of girls dropping out of school so as to support them to get back to school, remain and complete their education while those who have interest to learn vocational skills do so.

Hajia Lamnatu said Songtaba has targeted to reach out to about 100 girls and get them back to school and strengthen child protection system in the Northern region during the 12 months duration for the support.

Launching the grant support, the Country Programme Director of VVF, Mr Osman Mohammed said this was their maiden support to NGOs in Ghana and it was also to foster cooperation and collaboration among VVF partners and other stakeholders.

He said VVF is a private foundation headquarters in Portland, Oregon in the US and established in 2010 primarily to support rural communities in under-served regions to achieve self-sufficiency and have the opportunities to thrive.

"We do this, by making grants to non-profit organisations to undertake development programmes in various thematic areas including, but not limited to food security , livelihoods and financial wellbeing, family health, education, gender, and child protection in communities around the world", he stated.

"In Ghana , the foundation works in the Upper West region providing clean drinking water, improve school infrastructure and other relevant teaching and learning materials as well as supporting smallholder farmers to adopt sustainable agricultural practices such as conservation agriculture and Agroecology", he stated.
Other partners

The Programme Support Officer, PTSIF, Mr Abukari Saibu Wunpini and the Executive Director of PLG, Mr Mutawakilu Alhassan in their presentation respectively said they would use the grant funding received from VVF to strengthen existing projects that they were undertaken in the Savannah and North East regions respectively.

Mr Wunpini of PTSIF mentioned some of the activities they would use the funding for as the construction of a borehole at Klampobile in the Bole district of the Savannah region for their Shea Butter processing centre, a pilot inclusive smock project to train 25 women and girls, pilot a gender model family concept in two communities among others.

Mr Alhassan on his part said PLG will also use the grant to support farmers to undertake dry season vegetable cultivation in the West Mamprusi municipality (Walewale) in the North East region to enhance their incomes, ensure food security among others.