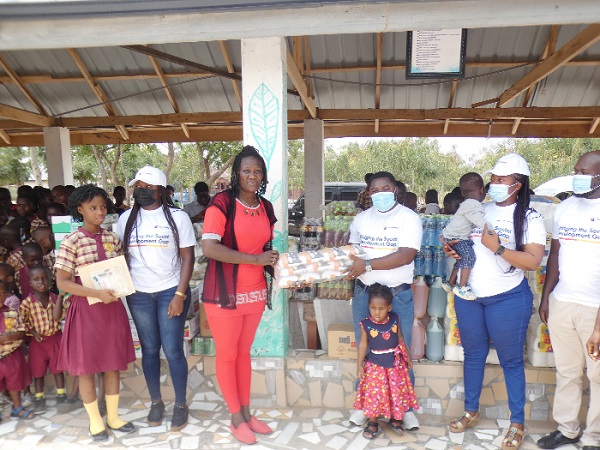 The Royal Seed Home at Papaase and the Rise and Shine Foundation at Kwakyekrom, near Nsawam, received bags of rice, gallons of cooking oil, flour, noodles, soap, tissue, water and beverages to support the children at the orphanages “to give them a feel of Val’s Day”.

The Chief Executive Officer (CEO) of the John Kinney Foundation, Mr John Kinney, said he grew up on the streets and that the gesture was a token of his own effort to improve the conditions of those in need.

"The foundation is there to help not only orphanages but groups and individuals who are in need," he said.
Donations by the foundation, he added, were funded from the coffers of the organisation, with intermittent support from other NGOs.

The John Kinney Foundation has supported individuals and groups.

The CEO of the Royal Seed Home, Mrs Naomi Esi Amoah, expressed gratitude to the foundation for the items, saying the items would impact the lives of the children in the home.

She said she spent some time on the streets as a child and that she founded the home to bring children out of the streets and give them a stable environment to grow up in.

The orphanage, she said, currently housed over 250 children, ranging from as low as three weeks old, with others having completed university education.

Some of the children, Mrs Amoah said had health issues requiring multiple surgeries, some of which had been carried out.

She said the orphanage had opened her eyes to the reality of some challenges encountered by children on the street.

The President of the Rise and Shine Foundation, Rev. Richard Nii Amartey Adesah, said he began the foundation after working with Persons With Disability (PWD) in his capacity as the President of the Amputees Football Association.

Currently, the foundation houses 125 persons with disability, developing their talents in music, information technology and sports.

He mentioned that Mr Kinney and his foundation had supported the orphanage for about eight years, including sponsoring the organisation to the PWDs African Cup of Nations in December last year.

"There is ability in disability, so if we are able to help these little ones, they would be able to contribute their quota to the country," he said and expressed gratitude to the JKF for the support.