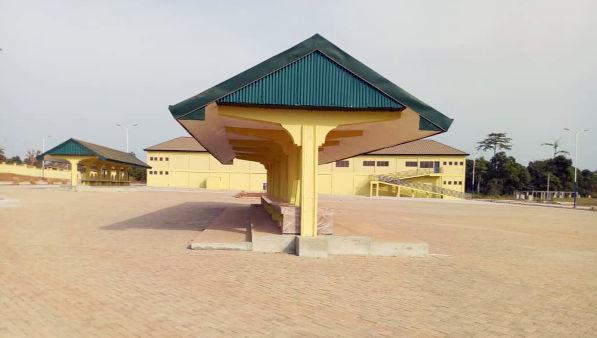 The construction of a GH¢3,868,621.61 new transport terminal at Dormaa-Ahenkro in the Dormaa Central Municipality in the Bono Region has been completed.

The project consists of fire, ambulance and police stations, a storey building that comprises shops and offices, places of convenience, a waiting canopy and a revenue checkpoint for the collection of revenue for the assembly.

The facility also has a pavement area of 11,235 square metres to serve as a lorry park, a fence to provide maximum security, streetlights to improve visibility for night activities and a mechanised borehole to provide constant water supply.

Currently, the Bono Regional Coordinating Council (BRCC) is putting measures in place to officially hand over the facility to the chiefs and people of the area.

The project was completed in 12 months after a sod was cut for its commencement in July 2020.

It was initiated to provide adequate space for vehicle operators at Dormaa-Ahenkro due to the congestion at the Dormaa-Ahenkro old lorry station, an inconvenience to transport operators.

The project was funded by the Ghana Secondary Cities Support Programme (GSCSP) and is an initiative under the Ministry of Local Government, Decentralisation and Rural Development (MLGDRD).

Its objective is to improve urban management and basic urban services in the participating municipal districts.

The GSCSP, which is also aimed at providing development projects and capacity building, is being undertaken in 25 selected municipalities and metropolises across the country.

The Dormaa Central Municipality is one of the three municipalities in the Bono Region benefiting from the GSCSP.

The Head of Works of the Dormaa Central Municipality, Mr Seth Acheampong, told the Daily Graphic that work on the terminal had been completed, explaining that technically they had handed over the keys to the consultant, waiting for its inauguration.

He said all transport operators within the municipality would be moved to the modern facility to help ease congestion at the heart of the town by the end of February, according to a road map drawn for the relocation.

Mr Acheampong said the construction of the facility was necessary because the population of the town was increasing at the old lorry station, making it very difficult for drivers to park and turn when the need arises.

The Bono Regional Minister, Mrs Justina Owusu-Banahene, told journalists during a visit to the area that technically the contractor had completed the project.
She explained that she was waiting for documents on the completed project to enable her office to assess whether the facility was fully completed.

Mrs Owusu-Banahene said after receiving the document, she would also send copies to the Ministries of Transport, Trade and Industry, MLGDRD and other security agencies such as the police, Fire Service and Ambulance Service to authenticate the facility before inauguration.

She said plans were far advanced to rehabilitate the old station under the phase two of the project.

Mrs Owusu-Banahene explained that the rehabilitation would also help give the town a facelift and facilitate movement to speed up economic activities.