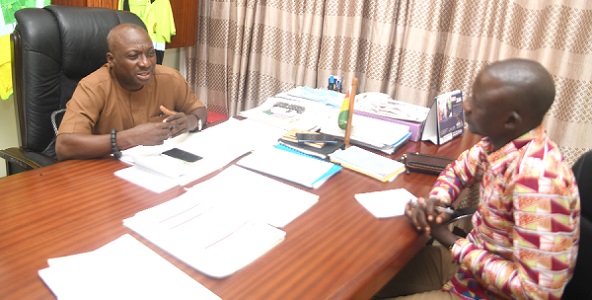 The National Road Safety Authority (NRSA) has initiated a process to roll out a new policy for the removal of disabled vehicles from the road.

The policy provides three options for funding the removal of breakdown vehicles to safety.

The policy gives the Ghana Police Service the mandate to compulsorily tow vehicles that have broken down or are parked wrongly on the road to designated holding centres, and the owners surcharged.

The new regime also provides legal backing to private entities to set up towing services for vehicle owners to voluntarily access their services to have their vehicles cleared from the road.

Then, vehicle owners will have the option of subscribing to insurance policies for the companies to take up the responsibility of removing their vehicles from the road when they break down.

The acting Director-General of the NRSA, David Osafo Adonteng, told the Daily Graphic that the authority had sent the policy proposal to the Ministry of Transport for perusal and submission to Parliament.

It comes more than five years after the failed attempt to implement a vehicle towing levy.

The policy proposal is contained in some reviews that have been made to the Road Traffic Regulation, 2012 (L.I 2180).

Providing details on the new towing policy, Mr Adonteng said the Motor Traffic and Transport Division (MTTD) of the Ghana Police Service would be given the power to compulsorily remove any vehicle parked at a place considered dangerous to life and property.

"When it is removed from the wrong place to a safer place, the cost of the towing and storage at a depot will be calculated and surcharged on the owner," he said.

He added that a second option was for private sector players to be engaged to set up at strategic places across the country and given the legal backing to take fees annually from vehicle owners who wished to access their services.

Mr Adonteng added that many insurance companies had bought into the idea of providing premiums to vehicle owners for the purpose of towing breakdown vehicles.

"When we are ready to roll out, we will publish the list of all service providers, where they are located, and their contact details so that people can easily call for support," he added.

The Road Traffic Regulations provide clear instructions for the removal of breakdown vehicles from the road.

Despite this law, some breakdown vehicles are left on the road for days and sometimes months.

In a bid to address the challenge, the NRSA announced that effective July 1, 2017, vehicle owners were required to pay a mandatory road safety fee to be charged during the processing of their roadworthy certificates by the Driver and Vehicle Licensing Authority (DVLA).

Per the details, owners of motorbikes were to pay GH¢10 annually, while owners of non-commercial vehicles would pay GH¢20.

For commercial vehicles, taxis would attract GH¢40; mini-buses would pay GH¢80, while heavy-duty trucks would pay between GH¢80 and GH¢200 annually depending on their tonnage.

In addition, foreign vehicles that were not required to go to the DVLA for road worthy certification were to be made to pay the required fees at the points of entry.

Mr Adonteng observed that it had become necessary to revisit the idea of getting an effective mechanism to clear breakdown vehicles to reduce the spate of road crashes.

The move, according to the NRSA, was to promote safety on the roads by way of providing reliable towing services such that when vehicles broke down, the authority could ensure that they were “swiftly towed” to prevent crashes into stationary vehicles, and prevent oil from leaking onto the roads to destroy them.

Mr Adonteng expressed the optimism that with the broader engagement that had gone on with key stakeholders, the new policy would be accepted by the public.

He said while efforts were being made to roll out the revised towing system, it was important for vehicle owners to take responsibility for the removal of breakdown vehicles from the road.