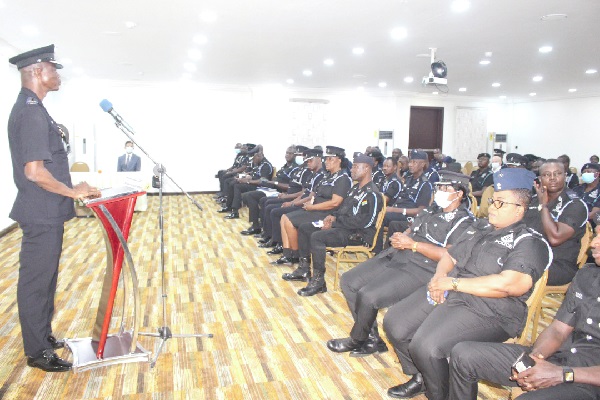 The Police Administration has commenced the piloting of its remodelled community-based policing (CBP) strategy aimed at bringing together the police, civil society and local communities to develop local solutions to safety and security in Accra and Tema.

The Community Policing concept, supported by the German Development Cooperation (GIZ) through its "Programme to Build and Strengthen Police Structures" and being implemented in nine African countries, is to improve public trust in the police and enhance cooperation among the police, the citizenry and the community.

The participants included 28 senior officers and 28 inspectors and chief inspectors selected from the Greater Accra Region.

During the five days, the participants will be introduced to reforms in the community policing model in Ghana, ethics and professional image building, problem-oriented policing, crime prevention and neighbourhood watch committee concepts.

The Director-General in charge of the National Patrol Department of the Ghana Police Service, Commissioner of Police (COP) Mr Paul Manly Awini, said the service was currently undergoing transformation to position it "as the most respected institution in Ghana and a reference point for the rest of the world".

Such a vision, he said, could only be achieved through intended actions on the part of the police.

"We must do the right things to bring the public to our side; do things that will be pleasing to them, so they will start respecting us. Respect cannot be bought or attained out of intimidation; it must be earned through our service," he said.

In line with plans, he said, the Police Administration had adopted three approaches, including going back to the basics to do the right things and making “sure we win the confidence and trust of the public”.

He said policing was a shared responsibility between the police and the public, not for only the Police Service.

The Country Manager of the GIZ Police Programme, Mr Philipp Niehenke, said the 'Programme to Build and Strengthen Police Structures in selected partner countries in Africa’ commenced in Ghana after the German Federal Foreign Office had invited Ghana to become part of it in 2019.

In Ghana, he said, the programme was focused on the training system of the Ghana Police Service, police accountability and community policing.

Also, he said, a video footage for sensitising the public was being developed, while a pictorial booklet to be used during police-community engagements was also being worked on.

He expressed optimism that the new community policing model would help build safe, secure and peaceful communities through partnership with members of the communities and other stakeholders.