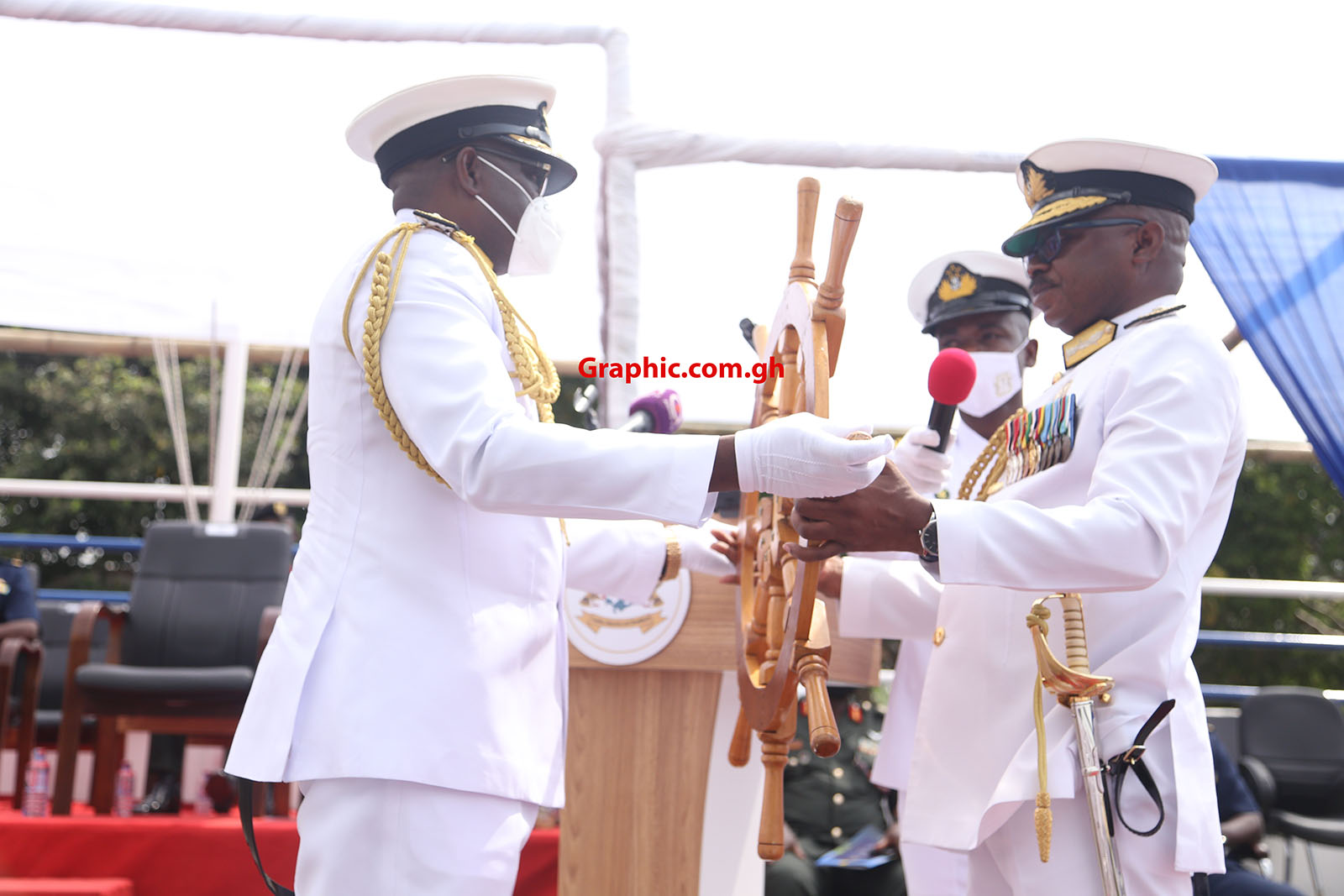 Rear Admiral Seth Amoama has handed over the baton of command of the Ghana Navy to Rear Admiral Issah Yakubu following his elavation to the high office of Chief of Defence Staff (CDS).

Rear Admiral Amoama has been serving the Ghana Armed Forces (GAF) for the past 40 years, with two years as the Chief of Naval Staff (CNS).

In line with the naval tradition, a farewell parade was held at the navy headquarters yesterday in his honour.

Dressed in a ceremonial naval uniform, Rear Admiral Amoama was welcomed by the naval officers, representatives of various security agencies, government officials, as well as family, friends and well-wishers.

After taking the general salute and inspecting the parade, he was showered with gifts from individuals, institutions, as well as the various naval commands in acknowledgement of his contributions to the development of the naval force, the GAF and the security of the country.

Rear Admiral Amoama was enlisted into the GAF in 1981 and had his initial training at the Ghana Military Academy.

He was sent to the Pakistan Naval Academy on August 1, 1982 to continue with his training and was commissioned into the Executive Branch of the Ghana Navy in December 1984.

He won the Sword of Honour on graduation in Pakistan.

Rear Admiral Amoama has held several appointments at various stages of his career in the GAF, both afloat and ashore.

In his farewell speech, the outgoing CNS commended the sailors for their smart turnout and for putting up a wonderful naval display at his farewell parade.

He recounted that two years ago when he took over as the CNS, the overwhelming euphoria that greeted his appointment was an indication of a huge expectation towards his assumption of office.

Although he recognised that there was not an immediate solution to every challenge and that some of the challenges of the navy required time and space, he had expressed the hope of living up to expectations because of his belief in professionalism, loyalty and the commitment of the entire naval fraternity.

“Today, we can look back with pride at what we have achieved together. By dint of hard work and our collective determination, we have been able to complete most of the major projects that I inherited from my predecessor and new ones started with majority of them completed,” he said.

Rear Admiral Amoama said in spite of the COVID-19 pandemic which affected the objectives and aspirations of the navy, it was able to deliver many projects, including the inauguration of the Naval Training Command and other training facilities at Yorve in the South Tongu District in the Volta Region.

In addition, he said there had been a modest effort to address some critical welfare related challenges in the navy.

While the navy continued to pursue the government agenda to acquire Offshore Patrol Vessel and Security Patrol Boats to provide continuous security for offshore oil platforms, he said it had also worked hard to maintain the existing fleet.

He expressed gratitude to the sailors and called for their continuous support, adding that “it has just begun so let us continue to paddle together and put our shoulders to the wheel”.

The incoming CNS, Rear Admiral Yakubu, said his predecessors had laid a solid foundation with their transformational agenda which had seen marked improvement in infrastructure, particularly in the Naval Training Command.

He gave the assurance that during his tenure, the long-awaited Offshore Patrol Vessel project and the Offshore Security Vessels for the protection of oil and gas infrastructure at sea would come to fruition.

“All my energy would be directed towards these projects and I entreat my staff to double their efforts to support the government to fulfil its intention,” the CNS said.