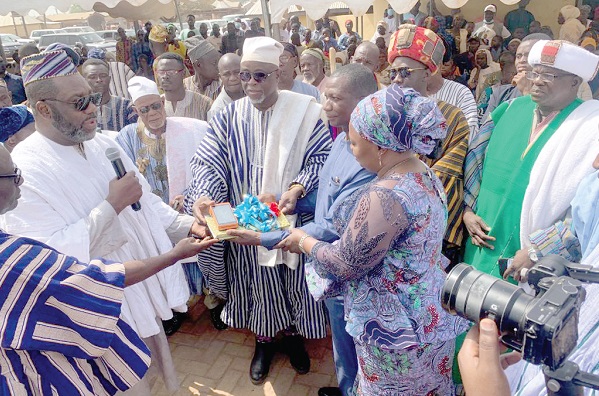 Dr Mathew Opoku Prempeh (2nd from left), the Minister of Energy, being assisted by Kari-Naa Nantogma Abdulai (middle), the Paramount Chief of Karaga, in the stead of the Ya-Na, and other chiefs to inaugurate the task force
30.5k Shares

The nine-member task force is expected to lead an exercise to monitor metre auditing, retrieve all locked-up funds and replace all old and faulty metres with smart metres in all its operational areas.

Inaugurating the task force, Dr Prempeh said the move was to clamp down on power theft, while improving revenue mobilisation.

While charging the task force to be professional and dedicated to their task, he urged the public to cooperate with them to enable them to discharge thier mandate effectively.

To that end, he said the ministry was working closely with the various power distributors for the establishment of more sub-stations across the country to improve on power supply.

The Managing Director of the NEDCo, Osmani Aludiba Ayuba, expressed worry about the increasing rate of power theft in the region and said the company was making huge revenue losses to the menace.

"Power theft has been a very serious problem affecting our operations; if the situation is not addressed urgently, the NEDCo risks collapse," he said.

He, however, expressed the hope that the task force would help seal all loopholes that result in massive losses.

On his part, the Overlord of Dagbon, Ya-Na Abukari II, lauded the minister for his immense efforts in providing affordable and reliable electricity to the people of the area.

He said through the minister’s efforts, the kingdom had for the first time, among other things, witnessed the building of eight solar power plants by the Bui Power Authority, with a total capacity of 259 MWp.

"Apart from its intended purpose of providing reliable and affordable power supply, it will also serve as a source of employment for the people in this part of the country," he noted.

The Ya-Na, however, appealed to the government to speed up work on the ongoing rural electrification projects in the kingdom and also consider extending the project to the remaining communities, adding "We have a whopping number of 114 communities unelectrified out of the total 248 communities."

He advised the people to desist from engaging in illegal power connections and attacks on staff of power providers when they went about their duties.