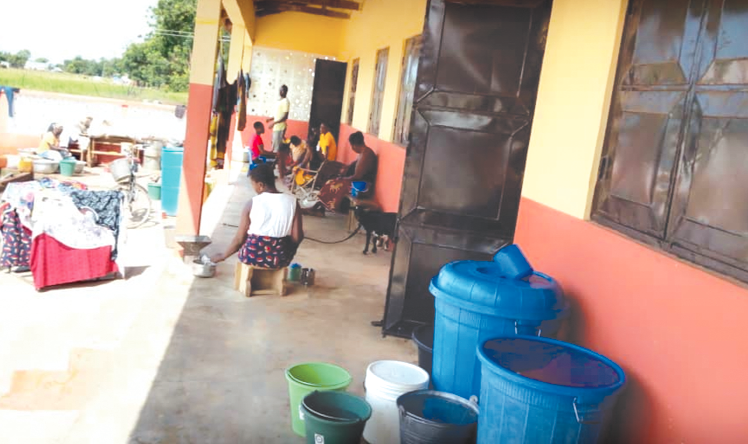 Four months after the devastating floods in the Northern Region, about 50 people in Nawuni in the Kumbungu District are still putting up in classrooms of the Roman Catholic (R/C) Primary School.

The displaced people, including children, were part of some 1,500 people in the community who had their homes destroyed by the floods that occurred between August and early October last year as a result of heavy rainfall, coupled with the spillage of the Bagre Dam in Burkina Faso.

With schools due to reopen on January 15, the fate of the displaced people hangs in the balance, as they have less than a week to vacate the school premises.

The Assembly Member for the Nawuni Electoral Area in the Kumbungu District, Alhassan Yussif, in an interview with the Daily Graphic yesterday, said the situation was precarious and needed immediate attention.

“Although majority of the affected people have gone back to patch the cracks in their buildings, while we await support to reconstruct destroyed homes, others are still living in the school block, a situation which is so disturbing, more especially as basic schools reopen on Friday," he said.

He said 78 out of the 98 households in the community had their homes destroyed by the floods, but so far about 58 of them had moved into their weak buildings for shelter to avoid the embarrassment of living in the school building.

Mr Yusif said a philanthropist who visited the community gave each of the 78 households six bags of cement to mend the cracks in their buildings, but it was not enough.

He, therefore, appealed for more support in the form of cement and roofing sheets to reconstruct homes to enable the people to move temporarily into them.

Expatiating on the dire situation, Mr Yusif said the people were also still waiting to be evacuated from their present location, as promised by the National Disaster Management Organisation (NADMO) and the United Nations Development Programme (UNDP) when officials of the two organisations visited them during the peak of the floods last year.

He added that their present location was not safe and appealed to the authorities to do something about it without further delay.

Some of the affected residents who lived in the classrooms with their children said they would not have any alternative but move into their weak buildings when schools reopened.

On November 21, 2020, the Daily Graphic published a feature story with the headline: "Nawuni, a community crying for help.”

The story said in part: "Over 100 families in Nawuni in the Kumbungu District in the Northern Region who had their homes destroyed in the recent floods that hit parts of the northern sector of the country will no longer have a place to lay their heads when basic schools reopen for the new academic year in January 2021.

"The residents, numbering over 200, had their buildings collapsed as a result of the flood waters that inundated Nawuni after a month of heavy rains, in addition to water from the spillage of the Bagre Dam through the White Volta.”

It said the homeless families were putting up in the local Roman Catholic  Primary School but would no longer have that ‘privilege’ when basic schools finally reopened for the new academic year in January.

“We are lucky that school is not in section as a result of the COVID-19 pandemic restrictions that have led to the closure of basic schools in the country," the assembly member for Nawuni had told the Daily Graphic in an interview.