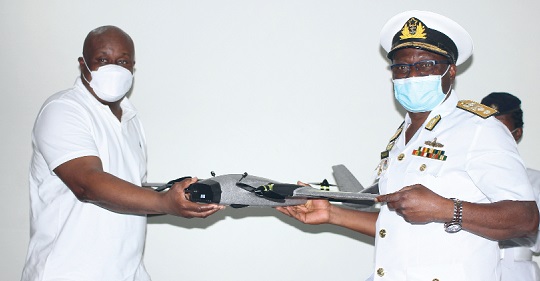 The Ghana Navy has received surveillance drones to enhance the training of personnel in electronic warfare to ensure security in the maritime sector.

A defence and technology company, Omnicad, presented the ZMO-120 drones with a 60-minute endurance capacity, capable of flying a distance of 40 kilometres at a maximum speed of 110 kilometres per hour.

The Chief Executive Officer (CEO) of Omnicad Group, Mr Michael Zormelo, presented the drones to the Chief of Naval Staff, Rear Admiral Issah Adam Yakubu, at the closing ceremony of an eight-week training for 13 naval officers on March 24.

The training was to equip the personnel on the operation, maintenance and use of the devices to identify security threats within the maritime domain to mitigate the risks within the country’s Exclusive Economic Zone (EEZ).

The Chief of Naval Staff said the importance of maritime security was key to the development of the country’s blue economy.

According to him, insecurity at sea affected everybody considering that nearly 90 per cent of the world’s trade was transacted via sea.
Rear Admiral Yakubu said one of the cardinal strategies of the Navy was hinged on maritime domain awareness, considering that the country had a lot of resources at sea.

“The growing offshore oil exploration and production are also helping in the development of the country’s economy, and maritime tourism could also be another enabler if well developed.

“And since the Navy is the only agency with the capability to respond to such threats of insecurity, it is important to enhance the capacity of our personnel,” he added.

While commending Omnicad for the support, the Chief of Naval Staff expressed the hope that personnel would apply the knowledge acquired in all their endeavours.

He also tasked the research and development unit of the Navy to keep close eyes on the activities of personnel who would man the drones.

The Director of Training at the Navy Headquarters, Capt Dennis Eghan, said that the training exercise was conducted in collaboration with the Signal Training School & Soko Aerial Centre of the Ghana Armed Forces.

He said it would help personnel to perform better to aid critical response at sea.

The CEO of Omnicad Group said reported cases of maritime crimes and insecurity at sea had significant impact on the cost of shipments.

That, Mr Zormelo, said had a rippling effect on commerce and the general economy, not only of the country but also in West Africa, which continued to record incidents of insecurity at sea.

He, therefore, explained that the donation of the drones were to help personnel of the Navy to familiarise themselves with the operations and maintenance of the devices and also help them build prototypes that could influence the production of the devices locally in the near future.

“In addition to this, I am pleased to announce the offer of support for two Navy officers to undergo training in hydrography overseas to ensure the country acquires the requisite skills to effectively support maritime operations, as well as oil and gas activities,” Mr Zormelo said.

He further gave the assurance that his organisation would continue to support the Navy by providing capacity support through technology, research and development.