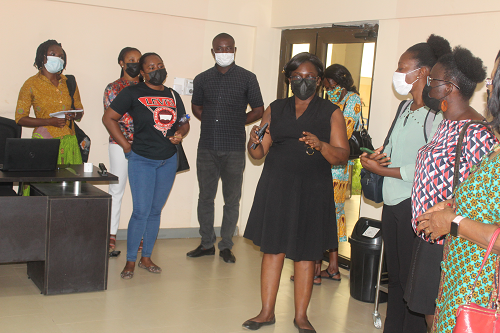 Management of the Navrongo Health Research Centre (NHRC), an agency under the Ghana Health Service (GHS) in the Upper East Region, say the centre was in a position to lead Ghana's agenda of developing her own vaccines locally, if given the needed resources and support.

The centre since its establishment in 1988 has taken part in many major vaccine trials in the country, and has also trained several clinical trialists and researchers for other health research centres and health training institutions in the country.

Conducting a team of health journalists from the African Media and Malaria Research Network (AMMREN) on a tour to the various laboratories at the centre, including the Biomedical Science laboratory, the Clinical Trials Centre, and the Molecular Biology room, the Head of Clinical Science Department of the centre, Dr Nana Akosua Ansah, said the centre only needed more support and commitment from the government to position itself to evaluate vaccines which will be produced in the country through the presidents initiative of manufacturing vaccines in Ghana.

She also added that there was the need to put in more efforts to build human capacity in the areas of clinical research.

For her, the centre had conducted many trials and had gathered enough experience and competencies to go into all phases of vaccines trials if given the needed supports.

She said the Navrongo Health Research Centre had also built confidence in its catchment areas concerning vaccines trials, hence it would not be difficult getting people to participate in its trial exercises.

She said although the centre did not developed vaccines itself, it had trained and built capacity to understand the science behind vaccines development and hence its assessments.

For more than two decades, the Navrongo Health Research Centre (NHRC) has been a leading institution conducting groundbreaking health research which has had a major influence on public health system in Ghana and internationally.

The NHRC started as a Field Station in 1988 and subsequently became a Research Centre in 1992, with an aim to be a national and international research centre of excellence that systematically conducts high quality demographic and health research to inform policy.

The centre, among others goals, was set up to enhance the development of evidence-based policies by generating relevant and empirical knowledge and information on priority health areas, as well as to facilitate the process of translating research findings into policy through dissemination and publication in peer-reviewed journals.

Dr Nana Akosua Ansah stressed the need for the country to pay more attention to building capacity of scientists and researchers, particularly in clinical research.

“From our experience from COVID-19, we can see that it is important to build our capacity as a country to conduct clinical trials. It would benefit not only the general population, but the growth of scientific research in the country.”

“We’ve had quite a number of vaccine trials. In fact, almost every vaccine that has been tried in Ghana before being introduced has had a certain phase done in Navrongo,” Dr Nana Ansah noted.

She observed that infectious diseases continue to emerge, and that the best way to fight such diseases was to invest in vaccines.

Dr Nana Ansah noted that as many infectious diseases continue to emerge, it was obvious that vaccines would become more important in all healthcare systems.

The NHRC’s Head of Clinical Science Department said the Centre has over the years concentrated more on childhood vaccines such as rotavirus in diarrhoea, meningococcal A vaccine in meningitis and now malaria vaccine..

“Adults have asked us why we are neglecting them and focusing on the children, so when there was an opportunity to take part in adult vaccine trial, the numbers have been quite overwhelming, and the enthusiasm is high,” she indicated.

For Dr Nana Ansah, people did not walk in to the centre to take part in vaccines trials due to the monetary compensation (transportation fares), but due to their understanding of vaccine trials as well as the trust and confidence they have in the centre.

The Acting Director of the centre, Dr Patrick Odum Ansah, said the centre since its establishment had helped to promote the health of deprived communities through research and education, adding that the centre helps to identify and develop appropriate research tools that can adapt to changing research needs and priorities.