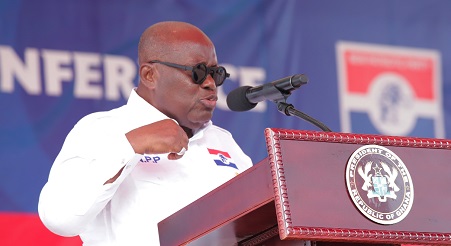 President Nana Addo Dankwa Akufo-Addo has given an assurance that the government will negotiate a good deal with the International Monetary Fund (IMF).

Negotiations with the Bretton Woods institution, he said, would have the interest of the ordinary Ghanaian at the centre, revive and continue to build an even stronger economy.

Addressing the National Delegates Conference of the New Patriotic Party (NPP) at the Accra Sports Stadium last Saturday, the President said the NPP had a tradition of taking Ghana out of difficulty.

He made reference to how the Kufuor administration took the country out of the Heavily Indebted Poor Country (HIPC) initiative, while his (Akufo-Addo) administration, in its first term, led the country to exit the derailed IMF programme inherited from the administration of former President John Dramani Mahama.

“I want to assure the people of Ghana that we are going to negotiate a good deal with the IMF; a deal that will allow us to revive our economy and continue the task of building an even stronger economy than we had before,” he stated.

He said just as the government had secured the jobs and salaries of public sector workers and provided free water and electricity for the people at the peak of the COVID-19 pandemic, it would approach the negotiations with the best interest of the ordinary Ghanaian at the centre of it all.

President Akufo-Addo noted that at the peak of the COVID-19 pandemic, the country went into a lockdown, while public sector workers had to stay at home, some for about a year, but none was dismissed nor had his or her salary cut.

He said to help ameliorate the situation, the government paid in full salaries and provided free water and electricity for the entire country, adding: “That is the measure of the NPP for the working people in our country.”

He said those were some of the concerns that would guide the government in the negotiations it was about to have with the IMF.

“Our responsibility is to confront the difficulties confronting our people and find effective solutions to them, and that's exactly what we're going to do,” he stated.

Office
The President reminded the gathering that the NPP came to office under what he referred to as “a derailed IMF programme inherited from the Mahama Administration”.

Nevertheless, he said, his administration worked hard to exit the programme and was in the process of building a strong and vibrant economy until COVID-19 struck, with its consequences.

“Our party was the one that made it possible for us to survive the COVID-19 pandemic with one of the lowest mortality rates in the world. We have done it before and I believe we will do it again,” he said.

He assured the party faithful that it was with that strong economy that the government would offer the platform for the NPP to secure victory in 2024.

“It is our historic duty to maintain the NPP in office under a new candidate and new leader but with the same commitments, good governance, sound economic management, respect for human rights and the rule of law,” he said.

He said the agreement had demonstrated the concern the NPP had for the concerns of working people.

He said the elections at the congress were the final lap of electing party officials, which had started with electing polling station executives, electoral area coordinators, constituency executives and regional officers.

“No political party in Ghana has displayed the organisational skills and capacity like what we in the NPP have done and God bless the New Patriotic Party,” he declared.

The President commended the immediate past National Chairman of the party, Freddie Wosemewu Blay, who used to be a Member of Parliament for the CPP but converted to the NPP after he had seen “virtue in the NPP and its value and decided to join us”.

He explained that in 2015 when the NPP had its crisis, with some members trying to sow unnecessary seeds of discord and confusion, Mr Blay stepped in and took charge of the affairs of the party as acting National Chairman and led it to victory in 2016.

He said Mr Blay again led the party to win the 2020 elections as its National Chairman and assured the former chairman that the party would never forget him.

In a video message, former President John Agyekum Kufuor said the election of the national executive would advance the determination of the party to “break the eight”.

He urged the members to operate democratically, in tandem with the party’s tradition.

He said the NPP required unity so that it would approach the 2024 polls as a very attractive political party to draw people to its fold to win decisively.

“Ghana needs our party to bring it to prosperity and transformation, which must be the aspiration of all of us,” former President Kufuor said.