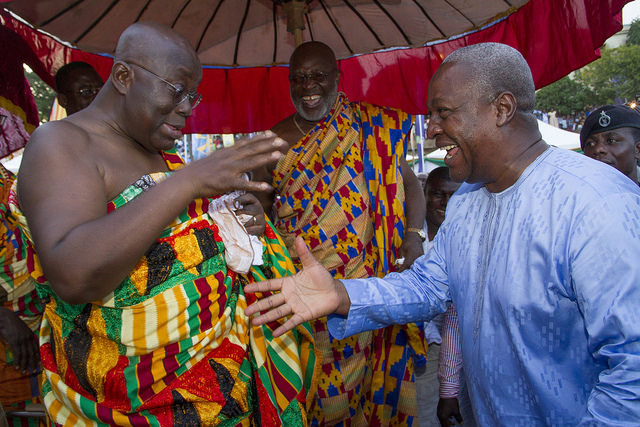 He has therefore advised the President to go for Obinim’s sticker to help him manage the affairs of the state.

Bishop Obinim’s sticker currently trending on social media is deemed to help cure many things and the former President believes it could help cure the ‘super incompetence’ of the NPP government.

The sticker which is said to work wonders, the former President said must be given to the sitting President and his government so they can perform better.

The trend is based on hilarious and outrageous claims people are making and attributing to the supposed miraculous sticker from Bishop Daniel Obinim, the self acclaimed "Angel Obinim", founder and leader of International God’s Way Church.

Apparently, church members of Obinim have been giving testimonies at his church on supposed wonderful things the sticker has been doing for them ever since they bought it.

And that has sparked the Obinim Sticker Challenge On Social Media.

Mr Mahama, addressing NDC members in Wa in the Upper West Region on Saturday after embarking on a unity walk said the sticker is needed for Akufo-Addo and his team to perform.

“I have been watching social media lately, and there’s something that has come, and I think it cures everything. It’s the Obinim sticker, the President and his government need an Obinim sticker. If it really works, then I think they need the sticker. So I am saying that we cannot depend on their incompetence, we need to work hard to gain the support of the electorate,” Mahama said.

“We are more committed to the Fourth Republic than any other political party in this country. We do not support any truncation of our current democracy in any way. If somebody said something, he might have said it in some context not that he had any intention or we had any intention to truncate the mandate of the NPP” he said.

“Indeed we must not help the NPP out by truncating their mandate, let them go through the full embarrassment of their four years. If we push them out, they will say “we were just at the verge of delivering our promises and we were taking out”, he added.

He further advised them to work hard towards wresting power from the New Patriotic Party (NPP) in the 2020 general elections.

He noted that though the NPP had so far proven to be “super incompetent”, the NDC’s victory in the 2020 elections will mostly be dependent on hard work and commitment by party members.

“I must say that we must do hard work. You do not win an election on the weakness of your opponent. You win an election because the electorate has confidence in you to give power to you and so although the NPP has proven to be super incompetent, we cannot sit down and relax and say because of their super incompetence we are going to win the election.”

“We must work hard to convince the electorates that we deserve to be voted into power. We won’t depend on their super incompetence.”