NAM 1 not yet on Interpol wanted persons list
30.5k Shares

The Chief Executive Officer (CEO) of , Nana Appiah Mensah is not yet on the public Wanted list of the International Police (INTERPOL)

Criminal Investigations Department (CID) of the Ghana Police Service yesterday announced that it had started a process which will ensure that Nana Appiah Mensah was brought to justice.

However, a search of the Interpol Wanted list by Graphic Online revealed that Nana Appiah Mensah popularly known as NAM 1 was not yet on it. 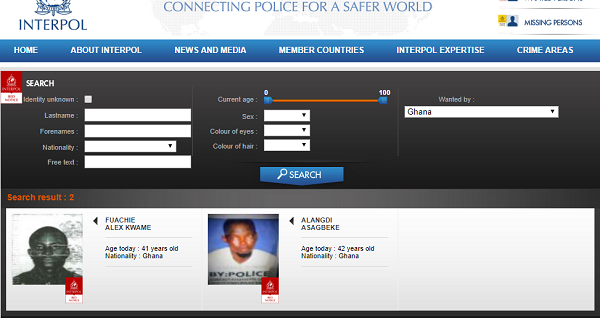 There are currently only two Ghanaians on the INTERPOL list of wanted persons; 41-year-old Fuachie Alex Kwame and Alangdi Asagbeke, 42.

The Red Notice includes information such as the individual’s name and the criminal charges for which they are wanted.

NAM 1 is currently wanted by the Criminal Investigations Department (CID) of the Ghana Police Service to answer charges including money laundering, defrauding by false pretences, among others, while officers of the Economic and Organised Crime Office, are also on his trail.

How wanted persons are placed on the INTERPOL Wanted List

Wanted persons on the list after INTERPOL issues a Red Notice to its 194 member countries.

How is a Red Notice issued?

Are the individuals wanted by INTERPOL?

Who are the subjects of Red Notices?

Why is the Red Notice important?