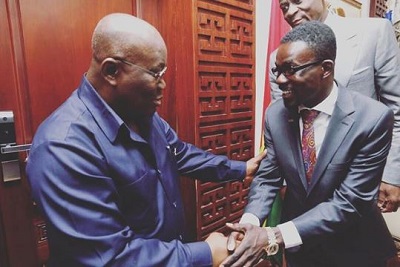 The Deputy Minister of Information, Pius Enam Hadzide has explained how the fugitive CEO of Ghana Limited, Nana Appiah Mensah got a now-famous photo opportunity with President Akufo-Addo

to Mr Hadzide, Nana Appiah Mensah popularly known as NAM 1 was part of a 10-member Ghana Football Association (GFA) and Confederation African Football (CAF) delegation that paid a courtesy call on Akufo-Addo at the Jubilee House last year in Accra.

The Criminal Investigations Department (CID) of the Ghana Police Service on Thursday declared NAM 1 a wanted man over the operations of his gold dealership firm .

The Police also revealed that they have requested for a Red Notice from the International Police (INTERPOL) making NAM 1 a wanted man in 194 countries.

Speaking in an interview on Okay FM Wednesday, Mr Hadzide said the picture which has been circulated widely on social media platforms was taken after that meeting between Akufo-Addo and CAF President Ahmad Ahmad.

He said the President discussed Ghana's intention to host the 2018 Women's AFCON with Mr Ahmad.

Mr Hadzide who was the then Deputy Minister of Youth and Sports explained that NAM 1 was included in the delegation because the time, one of his company's Zylofon Cash was the headline sponsors of the Ghana Premier League.

‘Buyer beware’; Gov’t has no obligation to Menzgold investors – Ofori-Atta

Bank of Ghana not to blame for Menzgold’s clients woes

He said any assertions by political opponents that the picture convinced people to sign onto Menzgold Ghana Limited investments was unfortunate because it suggests that the customers lacked the apparatus intelligence to decide on where to invest their monies.

He said some mischievous persons have sought to create the impression that the President endorsed the business of during a visit to the company. 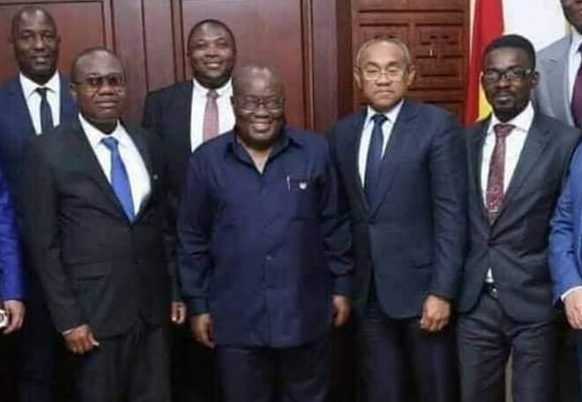 However, the Member of Parliament for Ningo Prampram, Sam George has questioned the circumstances that led to NAM 1 - whose business had been declared unlawful by the Securities and Exchange Commission and Bank of Ghana - was allowed into the Jubilee House without a security check.

According to him, celebrities who associated with NAM 1 could be forgiven for doing but not the Presidency because they do not have the benefit of conducting background checks using the entire state apparatus.

Speaking in an interview on Metro TV's Good Morning Ghana, he said that photograph and subsequent posts by the Presidency on social media was a tacit endorsement of Menzgold's operations.

Meanwhile, the Presidency has described as fake a tweet sent out from Akufo-Addo's Twitter handle - @nakufoaddo - which expressed admiration about the success story of Nana Appiah Mensah.

According to a statement signed by the Director of Communication at the Presidency, Eugene Arhin, the president’s Twitter handle has never been never been used to praise NAM 1.

The statement also stressed that Akufo-Addo never had a one-on-one meeting with NAM1 during their encounter on 25, 2018.

Eugene Arhin, Director of Communication at the Presidency response to Fake Tweet by the President.

Good morning Randy. My attention has been drawn to some comments made by Hon. Sam George to the effect that President Akufo-Addo tweeted his admiration for the success story of NAM1. I want to put on record that NEVER has the President’s twitter handle been used to do that. That supposed tweet is a fake and I’m daring Hon. Sam George to prove that indeed that has been done. President Akufo-Addo never had a one-on-one meeting with NAM1 on the 25th of April 2018.

On that day, GFA officials and CAF officials, including its President Ahmad Ahmad, paid a courtesy call on President Akufo-Addo, ahead of the conferment of an honorary doctorate degree by the University of Professional Studies. The then GFA President, Kwasi Nyantakyi, only brought NAM1 to the meeting because 4 days earlier, on 21st April, Zylofon had indicated its decision to sponsor the Ghana Premier League. Never on that day did the President have a one-on-one meeting with NAM1 and never on that day did he post that fake tweet being forcefully trumpeted by Sam George.