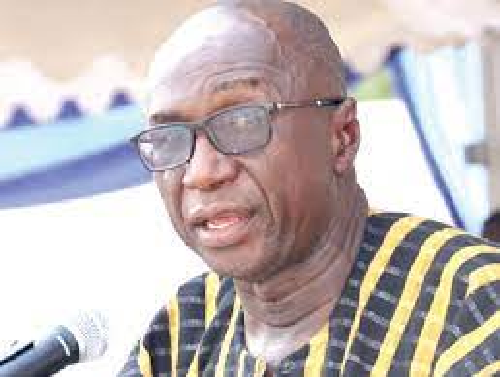 The Minister for the Interior, Mr Ambrose Dery Follow @Graphicgh

The Governing Council of the National Disaster Management Organisation (NADMO) has been inaugurated, with a call on members to deal decisively with vulnerabilities.

The Minister for the Interior, Mr Ambrose Dery, who made the call, said dealing with vulnerabilities would help reduce disaster risk in a period when the world was witnessing increasing frequency of disasters.

Fourteen of the 15 members of the board who were present took the oaths of office and secrecy administered by Mr Dery.

It is chaired by Brigadier-General Kwame Oppong-Kyekyeku (retd).

A representative of the Ministry of Defence is yet to be appointed to serve on the council.

Mr Dery said climate change was taking a toll on the global community.

“Climate change is exacerbating hydrometeorological activities, resulting in the disruption of the normal environmental pattern, engendering economic losses, poverty and misery,” he said.

The minister entreated members of the board to ensure operational efficiency and also pay attention to the welfare of personnel of NADMO.

Brigadier-General Oppong-Kyekyeku thanked President Nana Addo Dankwa Akufo-Addo for the opportunity given them to serve the country and gave an assurance that they would discharge their duties and responsibilities creditably.