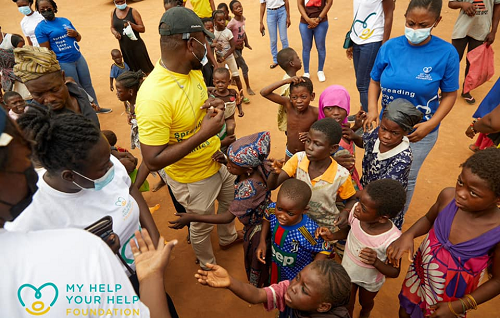 Food remains a basic necessity of life and a key ingredient for human growth, particularly children. It is based on this reason that health experts admonish parents and guardians to feed their children with nutritious meals – balanced diet.

However, many children, particularly those on the streets cannot afford the luxury of eating nutritious meals, let alone, eating three times in a day—they are less privileged.

From dusk to dawn, many of these streets children, mostly in an unkempt clothes, wriggled through traffic congestions to beg for alms to enable them to eat.

According to the United Nations Children’s Emergency Fund (UNICEF), nearly half of all deaths in children under five are attributable to undernutrition. This is because undernutrition puts children at greater risk of dying from common infections, increases the frequency and severity of such infections, and delays recovery.

In its 2018 report, UNICEF indicated that approximately 3.1 million children die from undernutrition each year.

As part of its drive towards ensuring that less privileged children on the streets also get access to nutritious meals, MyHelp-YourHelp Foundation, a Christian-driven non-governmental organisation (NGO), last Saturday feted over 500 street children in Accra.

Dubbed: “Feed a Child, Save a Life", the feeding spree started from the Opeibea bus stop to Madina Zongo Junction.

With pick-up vehicles loaded with packed food, members of the group dressed in their colourful branded polo-shirts reached out to every child on the streets.

From bus stop to bus stop, the “food vehicles” moved slowly whilst the team members dashed out food, water and drinks from it.

The members of the foundation, who carried placards bearing inscriptions such as “Our primary purpose in life is to help others,” “Love is not patronizing and charity isn’t about pity, it is about love,” “Feed a child, save a life,” “I support Myhelp-Yourhelp Foundation,” “Mathew 25:35”, and “Approximately 3.1 million children die from under nutrition each year” also shared with word of God with the children.

Some of the team members of chanted slogans and mottos of the foundation, attracting the attention of waiting passengers at the various bus stops they past.

The President and Founder of the Foundation, Nicholas Cofie, espoused the need for people who have the means to reach out to the underprivileged in the society such as the street children.

For him, it was not the choice of the children or their parents to be on the streets begging for basic necessities of life such as food.

He said it was worrying that children who were supposed to be in the classroom were on the streets begging for food, pointing out that, as a Christian-driven foundation, the foundation each year feeds as many children as possible from it little coffers. 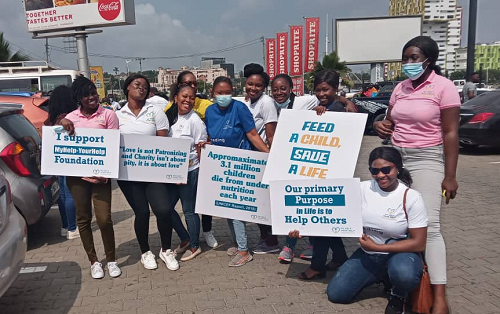 Mr Cofie noted further that the foundation as side feeding streets children also visits orphanages and prisons to feed them.

He said the Foundation which is in its third year mobilise resources both internally and externally in aid of reaching out to the needy whilst assisting with education, skills development and training and inculcating in them the 'can do spirit' of carving a niche for a brighter future.