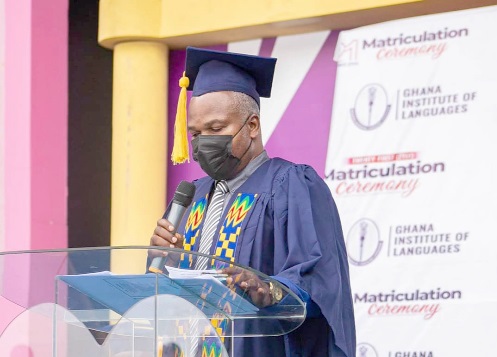 The Rector of the Ghana Institute of Languages (GIL), Dr Samson Dodzi Fenuku, has expressed the need for many students, workers and majority of the Ghanaian populace to venture into learning new languages.

He was of the view that having a multilingual background opened up many opportunities.

In addition, he said Ghana for instance, being surrounded by many Francophone countries, was a clear indication that it needed to focus its attention to learning new languages.

Dr Fenuku said this at the 21st matriculation ceremony of the GIL at the institute's auditorium in Accra.

The Rector of the institution stressed that having a multilingual background gave one the chance to understand and appreciate other cultures.

He admonished the matriculants that multilingual education was an indispensable tool for peace, which also promoted tolerance, diversity and understanding among communities.

“By opening our horizons through a change of attitude and neutrality, it helps us to empathise with cultures and tribes.

“This attitude can help resolve conflict among nations and improve life since there is understanding through effective use of language,” he stressed.

The institute offers diploma and bachelor of arts programmes as well as special programmes for interested people.

The institute has three schools under its umbrella which offer various courses in English, Arabic, French, Spanish, Portuguese, German and Russian languages.

These schools are the School of Translators, School of Languages and School of Bilingual Secretaryship

The Rector of GIL mentioned that the academic programmes of the institute were of high quality and tailored towards the liberal market.

He said they were very competitive and industry driven and therefore, advised the students to take advantage of the programmes, attain for higher performances in order to achieve their aims.

He told the newly admitted students that the main objective of the matriculation ceremony was to “usher you into the philosophy, principles, norms, values and culture of the institute which we have held and projected as an epic centre for excellent learning and character building”.

Dr Fenuku revealed that the institute had over the years played a frontline role in turning out the requisite human resource with industry based skills to speed up the wheels of development.

“It is a fact that more than 90 per cent of our students secure jobs while in school through industrial attachment programmes or immediately after school,” he said.