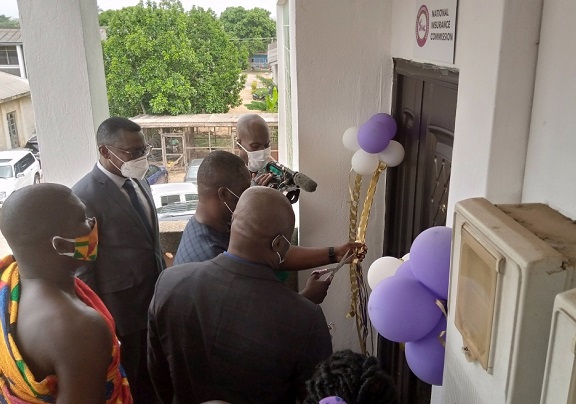 The MCE of New Juaben South, Mr Isaac Appaw-Gyasi cutting the tape for the inauguration of the new NIC office in Koforidua.
30.5k Shares

The Eastern Regional Commander of the Motor Transport and Traffic Department (MTTD) of the Ghana Police Service, Chief Supt. Stephen Ahiatafu has urged drivers and vehicles owners to procure insurances for their vehicles to handle accidents on the road and protect their property.

He said that it is illegal for drivers to ply the road without insurance, hence the police in the region have braced up to take on vehicle and drivers involved in this irregularity.

He was speaking at the inauguration of the new Eastern Regional office of the National Insurance Commission (NIC) on Wednesday (March 31, 2021) in Koforidua.

Chief Superintendent Ahiatafu explained that the drivers and vehicle owners struggle to pay for damages in events of accidents, hence the need for insurances policies to take care of such costs in the event of accidents.

Assistance to policy holders
Speaking at the ceremony, the Chief Executive Officer of the NIC, Dr. Justice Ofori said new regional offices have become necessary to effectively assist in handling policy holder disputes with insurers and enforcement activities outside Accra.

“The branch offices of the Commission were initially established to facilitate engagement with policy holders that do not reside in Greater Accra and its environs. Over time, the duties of the regional offices have increased to assisting in the policy holder disputes with insurers and enforcement activities in relation to the Commission’s directives”, he said.

Dr Ofori explained that the Commission’s aim of fulfilling the Insurance Act 2006, Act 724 centred on the “protection of policy holders, the effective supervision of insurance and carrying out public education on insurance”, has been motivated in the establishment of network branches all over the country including the Eastern Region.

He urged policy holders and insurers in the Eastern Region to foster a strong relationship with the NIC that “will result in improving the insurance industry and lead to the protection of lives and property”.

Business protection
The Eastern Regional Minister, Mr Seth Acheampong in a speech read on his behalf by the Municipal Chief Executive (MCE) of New Juaben South, Mr Isaac Appaw-Gyasi urged insurance companies and other stakeholders of the industry, including the Ghana National Fire Service, the Ghana Police Service and MTTD, the Driver and Vehicle Licensing Authority, municipal authorities, and the traditional authorities to take advantage of business opportunities that abound in the region and have their interest protected.

He added that the presence of the NIC is a booster as it would help in formalising the informal sector through financial advancement.

Commendation
Mr Appaw-Gyasi commended the NIC for firmly upholding the vision of the government digitisation agenda through the implementation of the Motor Insurance Database (MID) which has helped in combating the phenomenon of fake insurances.

He called on the public to take advantage of the short code provided by the NIC and the Police MTTD, [*920*57#] to check the authenticity of the insurance of vehicles they drive and board, so that these valid insurance policies could be fallen on in the event of an accident.