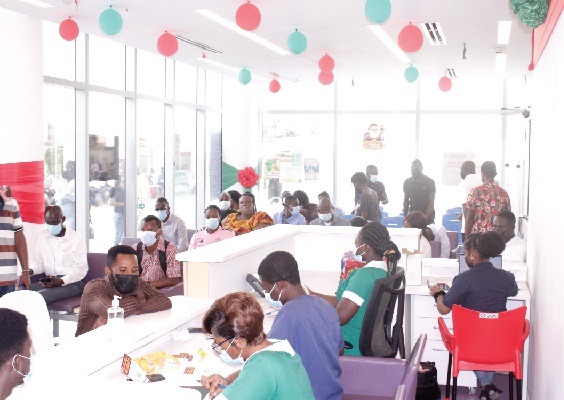 Some patrons waiting for their turn to be vaccinated at the Greater Accra Regional Hospital. Picture: REGINALD O. MENSAH Follow @Graphicgh

Many people are showing up at health facilities to take the COVID-19 jabs following the announcement that the government will soon implement a ‘No vaccination, No entry’ policy at ministries, departments and agencies.

At a number of health facilities such as Adabraka, Dansoman, Mamobi and Madina Polyclinics and the Darbem Medical Centre and the New Crystal Hospital at the Michel Camp, the vaccination areas were busy contrary to earlier situations where those centres were quiet with one or two persons trickling in to take the jab.

As early as 8 a.m. yesterday when the vaccination centres were opened, people had queued up waiting patiently to be served.

At the Adabraka Polyclinic, for instance, people waited for about 15 minutes in the queue for their turn.

At the Weija-Gbawe Municipal Hospital, there was also a long queue of people waiting to be given the vaccine.

Similar situations were observed at the other facilities where the entire process was orderly.

People who took the vaccine were duly registered and issued with the vaccination card after which their bio- data were captured.

The Daily Graphic also observed that the centres were patronised mainly by the youth, while others who had come to receive their second dose of the vaccine were left disappointed because those particular vaccines were not readily available.

The Manager of the New Crystal Hospital at Michel Camp, Mr Pascal Akligo, said even though there was high patronage, those who visited the hospital for the second jab of the AstraZeneca vaccine "had to be sent away since there is a shortage of that particular vaccine here".

He said currently they were administering the Moderna vaccine which was the only one available at the hospital.

A staff of the Darbem Medical Centre, Mr Stephen Anim, said the increase in patronage of the vaccines started in early December last year.

He said only the Pfizer vaccine was available at the centre, hence all those coming for the second dose of other vaccines had to be turned away.

A patron, Ms Cindy Agyei, said she took the first dose of the AstraZeneca vaccine and "I was due for the second dose two weeks ago, but anytime I come here, they tell me to go and come later".

To boost the national journey to reach herd immunity of at least 20 million of the population, the government declared December, last year as vaccination month.

By the close of November last year, a total of 5,556,210 doses had been administered after the launch of the national vaccination programme in March 2021.