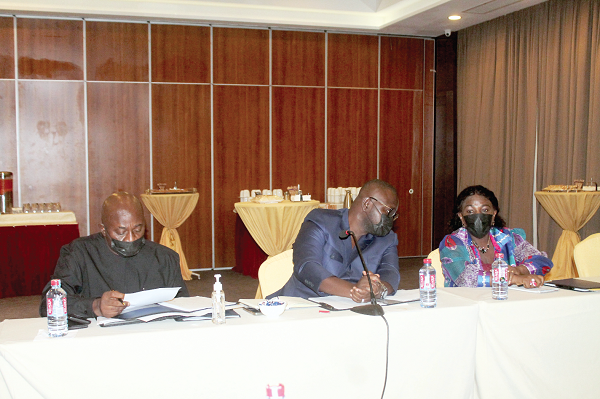 The government has given an assurance that it is speeding up work on the Greater Accra Resilient and Integrated Development (GARID) project to make up for the delays occasioned by  COVID-19.

It said the GARID project would improve risks associated with flooding and management of solid waste within the Odaw River Basin in the Greater Accra Region, identified as a key area susceptible to flooding.

The project was expected to have begun in 2020 and end in 2025. But, it could not take off fully as a result of the global COVID-19 pandemic.

The project is being funded from a World Bank loan of an estimated $200 million.

The project comprises five interrelated components. These are, improving drainage and flood control within the Odaw Drainage Basin; improving management of solid waste as well as minimising solid waste in waterways and participatory upgrading of low-income communities that are flood-prone.

The other two components are, project management and contingent emergency response.

Activities under component one, to be led  by the Ministry  of  Works  and  Housing  (MWH), include managing floods and improving urban drainage in the Odaw drainage basin through dredging and de-silting of the Odaw channel; Improving the drainage systems, that is, widening  of  the Odaw  river  outlet  into  the  sea, and the lining of major drainage channels and construction of selected secondary channels in the Accra Metropolitan Area.

Also included are the development of flood water retention areas and improvements in flood response systems by way of providing  better infrastructure for flood forecasting and warning systems.

For activities under component two, the Ministry of Sanitation and Water Resources (MSWR), will oversee improvements in solid waste management at the community-level through  the provision  of  waste  bins and  skips  and technical services for collecting the waste.

Other works include mobilising the communities and raising awareness; applying results-based incentive approach to enhance waste management and good sanitation practices and improving the capacity for managing solid waste in Greater Accra by identifying, assessing and improving waste collection, treatment and disposal facilities.

Mr Francis Asenso-Boakye, said the government was committed to preventing further loss of lives and property due to floods.

He said the project also made room for contingent emergency responses to immediate and emerging risks such as disasters, conflicts, epidemics, economic shocks and for situations requiring urgent assistance generally.

He said since the component of the GARID project were triggered by the outbreak of the COVID-19, it was being implemented with support from the Ministry of Health.

"I am very certain that with the holistic approach that is being adopted under the GARID project to tackle the twin challenges of flooding and solid waste management, there will be improvement in the sanitation and flooding situations in Accra. I am appealing to all stakeholders, therefore, to support the project.

Ms Cecelia Abena Dapaah, said the ministry’s mandate under the project included working to ensure that people refrained from and did not go back to the bad practices and mistakes that created the problems the project was seeking to address.

That, she said, was critical because the gains to be made under the project would have to be sustained to ensure value for the money invested in the project.

Mr Dan Botwe, said his ministry was committed to the project and was determined to see it succeed.