Military moves to flush out illegal miners from rivers 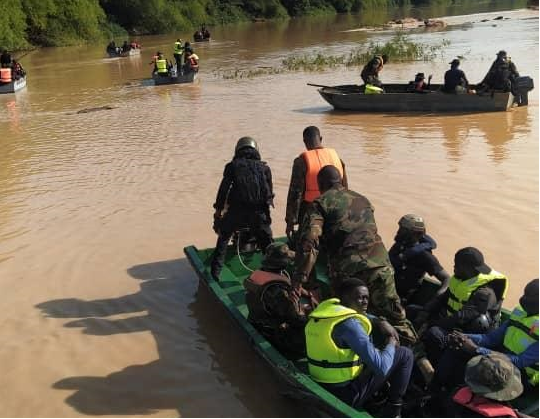 The Ghana Armed Forces (GAF) have begun an operation to remove all persons engaged in mining in water bodies in Ghana.

The operation, which started yesterday on President Nana Addo Dankwa Akufo-Addo’s directive, took off on the River Pra in the Central and the Western regions with 200 soldiers, who picked up some people and also seized some equipment.

A statement announcing the operation, which was signed and issued by the Minister of Information, Mr Kojo Oppong Nkrumah, yesterday, said the President’s directive was pursuant to the resolutions of the final communique of the Stakeholder Dialogue on Small Scale Mining held on April 14.

The operation, Mr Oppong Nkrumah explained, was to “ensure that mining within water bodies is immediately stopped”.

He indicated that the Ministry of Defence and the GAF would provide a detailed brief on developments and sustainability efforts tomorrow.

The action is the latest being taken by the government to curb the menace, after a directive was given by the Minister of Lands and Natural Resources, Mr Samuel Abu Jinapor, suspending all reconnaissance and prospecting in forest reserves, as part of measures to safeguard the nation’s natural resources.

The President’s directive follows a renewed call to fight illegal mining that has become a threat to the environment, particularly water bodies and forest reserves.

At the National Consultative Dialogue on Small Scale Mining in Accra two weeks ago, participants described illegal mining, popularly known as galamsey, as a national emergency that required urgent and concerted effort to deal with.

President Akufo-Addo, opening the forum, called for an impartial and non-partisan dialogue for the country to reach a consensus on a sustainable method of mining minerals.

The dialogue agreed there were widespread allegations of the participation of or the support accorded by people of prominence in government, the public and the civil services, traditional authorities, business leaders and other opinion leaders to these illegal mining activities, which had given credence and prominence to the activity.

In a communique issued at the end of the forum, the participants called on all political parties, stakeholder groups and individuals to join “the development and execution of this national, not parochial, agenda to rid ourselves of the long-standing issue of illegal small-scale mining and the need to implement measures to eradicate it from our society”.

“Galamsey has caused the worst forms of pollution and contamination of water bodies, in a lot of instances the turbidity, rendering them unsuitable for domestic use and even for treatment by the water company, and sometimes made toxic with chemicals such as mercury and cyanide,” it said.

It, therefore, resolved that the Ministry of Lands and Natural Resources take appropriate steps, Legislative and/or Executive action, as the case might be, to give effect to the set of measures arising from the dialogue and approved by the government.

Days after the forum, the Ministry of Lands and Natural Resources announced the immediate suspension of all reconnaissance and prospecting in forest reserves, directing all persons and companies engaged in those activities, with or without legal authorisation, to suspend them until further notice.

It also directed the Minerals Commission not to, with immediate effect, accept, process and recommend the granting, including renewal and extension, of reconnaissance and prospecting licences in forest reserves.

The Minister of Lands and Natural Resources, Mr Samuel Abu Jinapor, who issued the directive, said it was part of actions being taken to ensure the sustainable management and utilisation of the nation’s natural resources.

“For the avoidance of doubt, except as directed by the Minister for Lands and Natural Resources in writing, all activities and operations in respect of any reconnaissance and/or prospecting licences in forest reserves are hereby suspended until further notice,” it said.

All persons and companies engaged in reconnaissance and prospecting in forest reserves were given a seven-day ultimatum, from the date of the publication of the notice, to cease their operations and evacuate their equipment, accordingly.

“The minister has served notice on and requested the various regional security councils to strictly enforce these directives,” it said, stressing that “the Ministry of Lands and Natural Resources has the mandate to ensure the sustainable management and utilisation of the nation’s lands, forests and wildlife resources, as well as the efficient management of the mineral resources for socio-economic growth and development”.