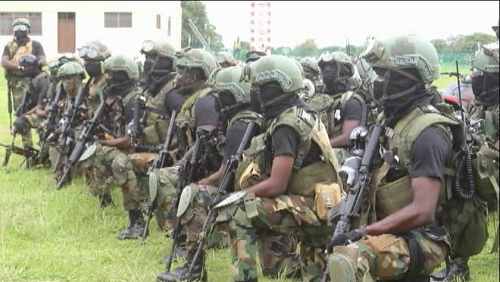 The Commander of Army Training Command, Brigadier General Winfried Dzandu-Hedidor, said the Military High command had observed that the military’s operations were being undermined by some greedy service personnel who condoned wrongdoing.

“Let me remind you that the Ghana Armed Forces high command expects nothing short of professional excellence in the performance of your duties in internal security operations, and it is, therefore, important that you uphold such tenets,” Brig. Gen. Dzandu-Hedidor said.

At a mission accomplishment parade at Burma Camp to welcome home some 74 personnel — including nine high-ranking officers — of the United Nations Organisation Mission in the Democratic Republic of Congo (MONUSCO GHANBATT 15), Brig. Gen. Dzandu-

Hedidor expressed worry that the unbridled love for money and greed had seen some personnel engage in activities that did not conform to the dictates of the service.

The group — which was the 31st since 2001 to have been deployed to the DRC for a 19-month period — provided missions in the areas of medical and dental outreach, security, community service, electoral coordination, peace support operations, among others.

Brig. Gen. Dzandu-Hedidor said whereas the group was faced with challenges of Ebola and the COVID-19 pandemic, which were at an alarming rate in the mission area, they displayed utmost professionalism in their operations, earning them commendation from the United Nations.

As a sign of commendation, the troops were presented with individual citations, with the Commander, Lt Col. Sebastian Abraham Arhin, receiving praise for providing leadership on the duty tour.

Announcing the service’s deployment programme for the December general election, Brig. Gen. Dzandu-Hedidor explained that the country remained peaceful and remained a beacon of peace in West Africa, and urged the personnel to demonstrate to the world that “we have come very far as a peaceful nation”.

He stressed that personnel would be deployed as part of the internal security operations to ensure the safety and security of the polls.

He urged the returning officers to bring to bear the rich experiences they gained while on the mission in DRC, and to also demonstrate a high sense of professionalism, loyalty and discipline at all times in the performance of their duties.

The Troop Commander, Lt Col. Arhin, described the mission as a difficult one which required professionalism and discipline.

He said whereas the duty tour was expected to have lasted for 12 months, the COVID-19 pandemic made it impossible for their replacements to be brought to relieve them, necessitating the extension by six months.

“While I must say that there is no military mission that comes easily, the deployment to the DRC is one that requires a lot of self-control and sacrifice, particularly when the troop was not located at one place”.

“However, I am happy to say that my team lived up to expectation, and we didn’t have any disciplinary issues with the UN,” he said.