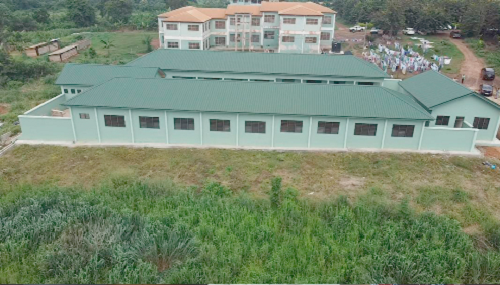 A dormitory block constructed by the authority. INSET: Mr Joe Danquah, Chief Executive Officer of the MBDA, addressing the media about some of the projects being undertaken by the organisation.

Mr Danquah, who was accompanied by the Deputy CEO with oversight responsibility in Ahafo, Bono and Bono East regions, Mr Alexander Ferka, and the Head of  Communications of the MBDA, Mr K.B Asante, said the tour of the Ahafo, Bono and Bono East regions was to monitor the 122 ongoing projects there to ensure quality standard delivery by contractors.

The projects, being provided under the One Million Dollars Per Constituency programme of the government, include the construction of dormitories for the Dadiesoaba Nursing Training School, the Hwidiem Senior High School (SHS) and the Acherensua SHS, and a 20-seater water closet (WC) facility for the people of Dadiesoaba.

The dormitories are architecturally designed to provide accommodation for the housemaster and housemistress, an ironing shed for each dormitory, a mechanised water system, internal open space for washing and drying of clothes,  a sizable compound, water closets (WC), among other facilities.

The Principal of the Dadiesoaba Nursing Training College, Mrs Marcelina Teni Kwose, thanked the MBDA CEO for the infrastructural support and urged the authority to complete the dormitory project and hand it over to the school on time.

She said the school has had to accommodate some 250 students outside the campus, and had arranged a means of transport for them to attend classes on a daily basis.

She said the cost of the transportation of those students took a chunk of the school’s resources, and that the dormitory facility would avail financial resources for other pressing needs of the school.

The Omanhene of Dadiesoaba, Nana Atta Mensah, commended the authority and the government for providing the dormitory for the school and a toilet facility in the town.

He, however, pleaded with the authority to inaugurate the doctor's bungalow and the dormitory for their immediate use.

The Headmaster of Hwidiem SHS, Mr Francis Oppong, commended the authority, and underscored the importance of the new dormitory to the school, saying it would increase the enrolment of girls in the boarding house.

The dormitory comes with an attached accommodation for the housemistress, and Mr Oppong said it would promote and enhance effective monitoring of the students in the house.

He said it would further promote and ensure improved sanitation in the school since it had a mechanised water system, modern WC facility and bathrooms.

Moreover, the headmaster emphasised it would help reduce crowding at the existing girls’ dormitory, particularly in the era of COVID-19.