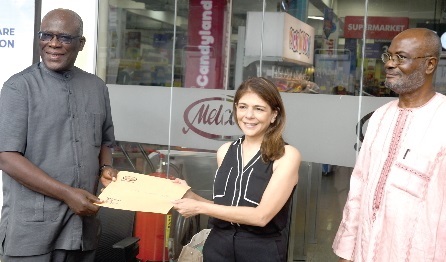 The Melcom Care Foundation, a philanthropic arm of the Melcom Group of Companies, has presented an undisclosed amount of money to the Centre for Communication and Culture, to support its effort to honour 13 veteran journalists.

The Melcom Group Director of Communications, Godwin Avenorgbo, said his outfit decided to make the donation in support of the centre’s effort to promote ethical and developmental journalism in the country.

He said versatile journalists operating in a strong, resolute, objective and fair media landscape was what the nation needed in its development process.

According to the director, the country’s socio-economic development could grow bigger and better when the media led in the campaign.

“The media has the men and women, you have the capability to lead the national interest by becoming the reliable voice of the voiceless in an all-inclusive approach for the benefit of the people,” he added.

Mr Avenorgbo, therefore, said it was important that Melcom supports the centre to honour people who had exhibited bold, strong and professional journalism in the country.

The Executive Director of the centre, Enimil Ashon, thanked the Foundation for the gesture and said the 13 persons would be honoured under a programme dubbed: “Ghanaian media: The bold, beautiful, ugly and maverick”.

He said they would be honoured for their boldness in the fight against oppression and corruption, particularly, under authoritarian regimes in the country.

“Under the project, the 13 legends will be honoured through TV interviews for 13 weeks. On September 21, a dinner will be organised in Accra, where they will each be awarded with a plaque, citation and a token.

“A 200-page book on the lives and works of the 13 veteran journalists will be produced and distributed to media houses and major institutions and departments of Communication Studies in the country,” Mr Ashon said.

“Honouring these legends is one of the ways to motivate the present generation of journalists to work hard to expose corruption.

“These personalities were bold, principled, they were not just throwing punches in the air but were hitting at the high and mighty on the land,” Mr Ashon added.