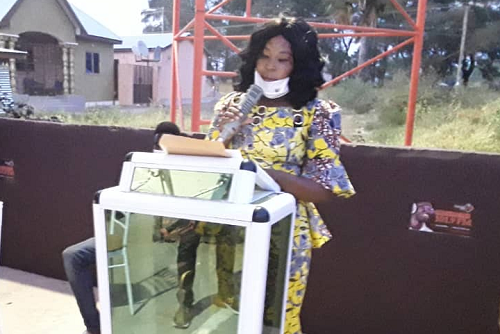 The Upper East Regional Minister, Ms. Tangoba Abayage has entreated media houses in the Region to help consolidate the gains made in the country's democracy by avoiding the temptation to churn out fake news or false information in the run-up to the December polls.

“I must caution you in the media landscape to be steadfast in providing good and reliable information to the public in view of us passing through an election year"she further stated.

The Regional Minister said this in a speech read on her behalf by an Assistant Director at the Regional Coordinating Council,Mrs Felicity Thelma Akana at the outdooring of a private radio station known as Dreamz FM located at Soe on the Bolgatanga-Bongo road.

The Regional Minister further advised media owners and media practitioners including radio presenters to “safeguard this hard won peace that we inherited from our forebears".

She pointed out that “elections must not divide us as a people; let us continue to be patriotic and active good citizens by giving the right civic education to the public".

Miss Abayage urged the media in the Region to avoid situations that will create anarchy in the Region since it can go a long way to enhance peace before, during and after the 2020 presidential and parliamentary elections.

She commended management of Dreamz Fm for investing in the Region and appealed to the business community and the general public to take advantage of the opportunities provided by the Radio station to market their products and subsequently boost the local economy.

The General Manager of Dreamz Fm,Mr Albert Azongo noted that the station has a vision “to be the brand that drives the media space in northern Ghana by innovation and to be the most preferred listener choice".

Its Mission is to “create a new direction and standard for Radio in the Upper East Region with listener-focused content that meets emerging desires”.

He further explained that Dreamz Fm was the result of a desire by a group of young men with the passion to challenge the status quo and to offer value for advertisers and listeners.

“It is a dream that has transformed into reality to impact various facets of the lives of the people in its catchment area and to contribute to the development of the Region" he noted.

According to the General Manager, “while we keenly keep our eyes on the emerging driving forces of the radio industry in Ghana and the world through technology, we seek to explore the existing opportunities offered by technology to reach audience beyond borders”.

Mr Azongo further mentioned four cardinal pillars through which the station hopes to realize its goals .They are, credible and timely News,News Analysis,Social Development and good entertainment.

He said the station will therefore among other things offer its listeners relevant conversation with a special bias towards socio-cultural issues that affect the people in the region.Within the shortest possible time the station will serve as the leading interface between the Region and the rest of the country.It will also give mileage to businesses in the Region and external clients with customized packages as well as directly influence the development of the Region.

“We want to join the league of media houses in the region that are giving voices to the people” Mr Azongo noted.

The Managing Director of Ultimate Impressions One Limited,operators of Dreamz Fm,Mr Daniel Atia Abotineriba noted that the station will strive to help maintain “zero tolerance for moral decadence”.

He pledged to ensure that the station included in its programme outline, 30 percent of traditional content as well as collaborate with traditional authorities in the catchment area to halt moral decadence among the youth.

“We are non-partisan and we will not tolerate insults during political discussions on air"Mr Abotineriba further stressed.

Other stakeholders in the Region like the Soe Youth Development Association and the Bolgatanga,Nangodi,Bongo and Tongo(BONABOTO)Union pledged to support management of Dreamz Fm to halt social vices among the youth through rich content.