MD of G-PAK laid to rest 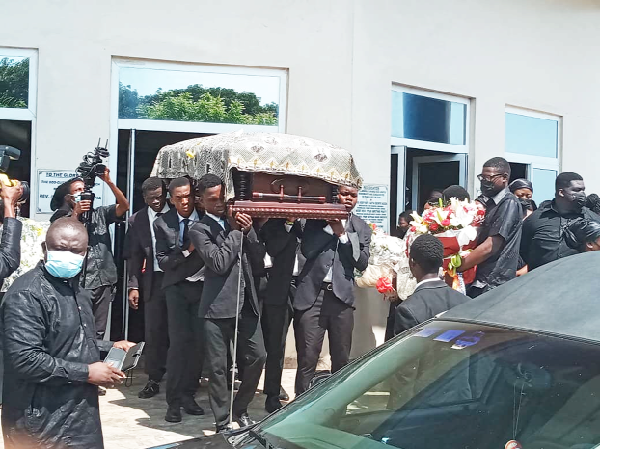 Pallbearers with the mortal remains of Mr James Dadzie

One of the stalwarts in the printing industry and Managing Director of G-Pak Limited, a subsidiary of the Graphic Communications Group Limited (GCGL), Mr James Kwame Edu Dadzie, was laid to rest last Saturday after emotions-filled ceremonies and rituals.

A burial service at the Garrison Methodist-Presbyterian Church at Burma Camp in Accra and the subsequent interment at Agona Nyakrom in the Central Region were the final journey paths of the 51-year-old who passed away in September this year.

The funeral was an outpouring of emotions, tears and a feeling of loss as family, friends, colleagues, schoolmates and sympathisers bade farewell to the once vibrant Mr Dadzie, affectionately called Joe Dee.

However, the emotions were equally matched by a sense of appreciation, gratitude and thanksgiving to God for blessing the world with a man described as caring, a problem-solver and people-centred by his loved ones and close associates.

Prior to his death on September 16, 2021, Mr Dadzie was not only the MD of G-Pak, one of the well-grounded printing and packaging companies in Ghana, but was also the Vice-President of the Ghana Printers and Paper Converters Association (GPPCA); the Sector Chairman of the Association of Printing, Packaging and Stationary Sector of the Association of Ghana Industries (AGI), Greater Accra Chapter, and a strong crusader for the printing industry.

Mr Kobby Asmah (facing camera), Editor of the Daily Graphic, interacting with some dignitaries at the funeral of Mr James Dadzie

A devout Methodist, Mr Dadzie was a member of the St John Methodist Church, Tantra Hills in Accra, and a patron of the Singing Band of the church.

He is survived by his wife — Mrs Deborah Dadzie — and two children, Jason and Deanette.

He said although death brought about sorrow, disruptions and setbacks, Christians must take solace in the fact that God had power over death and, therefore, whoever died in the Lord went back to the creator.

He said since no one had control over death, the prudent thing was for people to utilise their window of opportunity to be alive to help humanity and worship God.

“All of us are candidates of death.

Death does not respect age, class or status. Let us, therefore, anchor ourselves with God who has power over death,” he said.

Mr Dadzie was born on August 22, 1970, to Mr Stephen Seth Kojo Dadzie and Mrs Elizabeth Dadzie, both of blessed memory.

He had his primary education at the Achimota Preparatory School, and proceeded to the Achimota School in 1982 where he had his G.C.E. Ordinary Level education, and then to the Swedru Secondary School for his Advanced Level in 1987.

In 1989, Mr Dadzie was admitted to the Kwame Nkrumah University of Science and Technology (KNUST), where he graduated with a B.A. in Book Industry.

He is said to have dreamt of becoming a soldier but later channelled his passion into what he studied at the university — printing.

He began his printing career as Production Manager at Eddy’s Press, a printing press at Odorkor in Accra.

Afterwards, he worked with a number of printing companies, including Superflux International Limited, Nigeria.

He also joined forces with an old mate from KNUST to establish a printing company known as Creative Dimensions.

In 2000, he enrolled at the University of Ghana, Legon, to pursue a Master of Arts degree in International Relations.

After many exploits in the printing industry, both inside and outside the shores of Ghana, Mr Dadzie joined the GCGL as Director of G-Pak (Graphic Packaging) in 2012, and devoted his vast experience and knowledge to turn the company into a printing superpower.