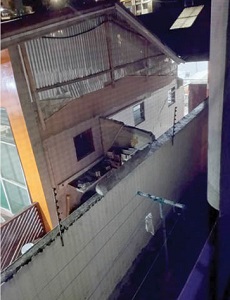 The portion of the bakery near the wall of the resident at McCarthy Hill. Picture: ELVIS NII NOI DOWUONA
30.5k Shares

A resident of McCarthy Hill in the Weija-Gbawe municipality has expressed concern over the operation of a bakery in the area due to the hazards it presents to neighbours.

She said apart from the noise pollution from the place, the strong scent from the baking as well as the danger posed by tankers discharging liquefied petroleum gas (LPG) posed a danger to her, especially as she shares a wall with the facility.

Georgina Addae, in a complaint dated May 23, 2022 to the Weija-Gbawe Municipal Chief Executive, Patrick Kwesi Brako Kumor, said: “I am disturbed day and night by the various fumes and smells coming from the bakery. It is a never-ending cycle of noise stemming from the employees working in the bakery as well as the use of industrial baking equipment which continues into the odd hours of the night and the cycle repeats itself the following morning”.

In addition to that, she said delivery vehicles began as early as 5 a.m. each, and that several attempts to discuss the issue with her neighbour, who operated the bakery, about the effect on her had been unsuccessful.

Ms Addae said the facility was disturbing her and her household as she was not able to open any of her windows due to the strong scent from the baking of bread.

“I am losing sleep over this daily as I am woken up on several occasions by a combination of what I have mentioned previously,” she said.

In view of the issues raised, she, therefore, requested that the baking operation be shut down since the area had residential facilities and that “such large-scale operation shouldn’t be allowed in the first place”

“I hope this is treated with the utmost urgency by appropriate authorities as this has become a serious issue which is affecting my household on a daily basis,” the letter said.

Ms Addae told the Daily Graphic later that her worst fear was when tankers entered the facility to discharge their content which is used for the baking.

“We become afraid when a vehicle comes in to discharge LPG. You know this is dangerous because an accident can happen and there may be an explosion which would not be good for all of us. I am here with my children and I tell you, it can be scary,” she explained.

Asked what had happened after she wrote to the municipal assembly, she said she and a representative from the bakery were invited by the environmental health officer to a meeting on the issue.

After the meeting, she said they were asked by the officer to go back home and that the environmental officer would get in touch with them again.

When the Daily Graphic contacted the environmental health officer of the municipality, who did not mention her name, she confirmed that she indeed invited the parties to a meeting after which she said she was going to get back to them.

Certainly, she said the assembly would get back to them as the matter was still under investigations.