The Food and Drugs Authority (FDA) has shut down two additional branches of Marwako Fast Foods in addition to the East Legon branch which was closed on Thursday over alleged food poisoning.

The FDA's action is part of investigations into the alleged food poisoning said to have affected some customers who patronised especially the East Legon branch at the weekend.

When Graphic Online passed by the Abelemkpe branch Friday [may 13, 2022] morning, the management of Marwako had started cleaning the entire restaurant.

The workers were seen busily sweeping, washing, scrubbing the floors and cleaning the glass doors.

Tables and chairs at the restaurant had been packed and the doors closed to the public.

A closure notice had been pasted on the glass door.

It read: “This establishment is temporarily closed pursuant to section 132 (1) of the Public Health ACT 2012, ACT 851. Food is not to be served from and by this establishment until this notice is removed by the FDA.”

Only workers were allowed into the restaurant, while customers who unknowingly visited the place had to return.

A statement issued Friday, May 13 by the FDA, said the authority in collaboration with the Ayawaso West Municipal Assembly, suspended all activities of the Abelemkpe branch of Marwarko restaurant in addition to the East Legon branch as part of the ongoing investigations on the suspected food poisoning incidence.

"The La branch of Marwarko has also been closed. As part of its investigations, the Authority has also visited Yeboah and Del hospitals, both in East Legon, for more information on the reported cases of the suspected food poisoning.

"The Authority's Centre for Laboratory Services and Research has taken relevant samples for further analysis to establish the cause of the food poisoning. As stated in our earlier notice, all necessary actions are being taken including revisiting all branches of the Marwarko restaurants to establish the extent of the incidence in order for corrective actions to be initiated to prevent any further harm to the public," the FDA has noted in a statement issued Friday, May 13. 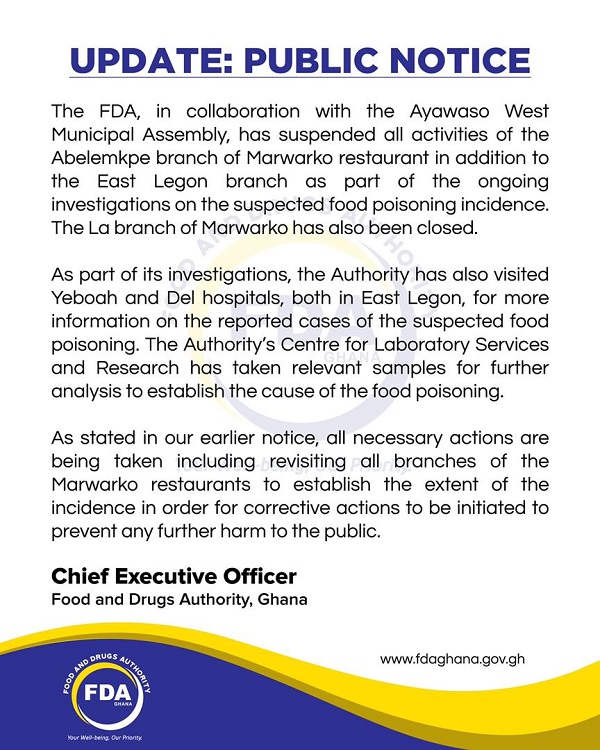 The customer complaints started on Twitter where some customers who patronised the restaurant during the weekend complained of having stomach upsets and therefore suspected food poisoning.

This led the FDA to first shut the East Legon branch down.

Reacting to the incident, the Public Relations Officer of Marwako, Anim Lamptey said the company is in touch with most of the affected customers, adding that they have taken up the medical bills of those who are on admission.