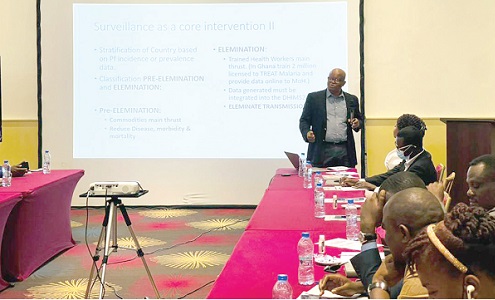 Prof. Binka explaining a point on malaria to the Parliamentary Select Committee on Health
30.5k Shares

An epidemiologist and former Vice-Chancellor of the University of Health and Allied Sciences, Professor Fred Newton Binka, has advocated the training of more people in the testing for and treatment of malaria.

He said he was of the belief that if at least two million people were trained to test and treat malaria, it would greatly enhance the country’s drive to eliminate malaria.

In an interview with the Daily Graphic, Prof. Binka suggested that retired teachers and civil servants staying in their villages could all be trained in malaria treatment.

“You are a retired teacher or civil servant staying at your village and they say there is no hospital; but you are the hospital. We can train you and the government can give you the drugs for the children and you can test and treat them. And when you do that, you would have given back to society,” he noted.

For him, since many Ghanaians already had knowledge about malaria, training and certifying such people to test for and treat malaria would impact positively on Ghana’s malaria elimination process and also help prevent the abuse of malaria drugs or medication.

Prof. Binka was speaking on the sidelines of a workshop organised for the Parliamentary Select Committee on Health by the Ministry of Health and the Ghana Health Service (GHS), with support from Speak Up Africa, a non-governmental organisation (NGO), in Accra last Thursday.

He said training and certifying many Ghanaians in malaria treatment would help provide accurate data on the scale of the menace.

The epidemiologist and researcher explained that people who self-treated malaria, without going to any trained person to test for and administer appropriate malaria medications, were about 10 times higher than those who went to see professionals.

That, Prof. Binka said, made it difficult for the MoH and the GHS, particularly the National Malaria Control Programme (NMCP), to have accurate data on the scale of the disease in the country.

“At the moment, the medical complexities of malaria are done with. We can now test for malaria very quickly and anybody can be taught how to do that. So we all know that if one catches malaria, the policy says one must treat it within 24 hours. If we do that, nobody will die from malaria and the drugs will work,” he noted.

He explained that there were effective malaria drugs on the market and that when people were properly trained to test and administer the right medications at the right time, it would help in the fight against malaria.

The former vice-chancellor further stressed that in order to get things done to help eliminate malaria, approaches to fighting malaria must be varied in regions and in seasons.

For him, the one-size-fits-all approach being used currently would not help eliminate malaria in the country.

Prof. Binka also called on the government to commit more resources to fight malaria, saying “if resources are not given to the people in the local areas, we can’t do anything”.

He was of the view that “when money is given at the national level, they don’t distribute it to the local level”, pointing out that the local assemblies needed money to implement malaria elimination programmes.

For him, political commitment was the magic bullet that would help the country eliminate malaria, saying the allocation of resources to fight malaria had been very low.

Touching on the essence of the workshop, the Programme Manager of the NMCP, Dr Keziah Malm, said the workshop was to help provide a better understanding of the malaria menace in the country to legislators to enable them to prioritise it among their activities.

“Basically, we are really pushing for the eventual elimination of malaria in the country; if not in the whole country, at least part of the country,” she said.

She said one of the key elements to help eliminate malaria in the country was to get the right political commitment, hence “the need to engage Parliament to push the agenda to eliminate malaria”.