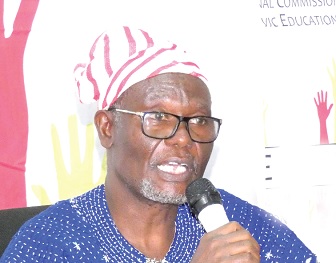 As the country marked the 30th anniversary of the coming into force of the Constitution in Accra on April 28, 2022, the National Commission for Civic Education (NCCE) has called on people clamouring for the review of the 1992 Constitution to hasten slowly.

According to the NCCE, the Constitution had served the country well and said calls for its review should, therefore, not be rushed.

"We call on people who have a role to play in the review process to put their shoulders to the wheel but ensure that the process is not rushed for it to serve us better," the NCCE added.

A Deputy Chairman in charge of Operations at the NCCE, Samuel Asare Akuamoah, made the call at a press conference at its headquarters in Accra to launch and outline activities for the celebration of the week.

The week was instituted in 2001 to commemorate the country's return to constitutional rule, especially on April 28, 1992 when the electorate voted in a referendum to adopt the draft Fourth Republican Constitution that came into force on January 7, 1993.

Among activities lined up for the anniversary are public lectures and a dialogue on the theme: "After three decades of democratic rule under the 1992 Constitution: Revisiting the agenda for constitutional reforms".

The NCCE also plans to engage 10,000 schoolchildren and students, as well as personnel of the Ghana Armed Forces in the various garrisons across the country, to deepen their knowledge and understanding of the Constitution and the need to uphold it.

Mr Akuamoah said that "a constitution that has served us for 30 years is unprecedented and nothing to belittle".

"Calls for a review of the Constitution are welcomed, but we should not be frustrated in rushing to do anything because it has served us well," he said.

He also said the Constitution had never encountered any coups d’état, been suspended or abrogated, adding that every violation that came up was dealt with.

"If there are contradictions and ambiguities that have frustrated members of the public and institutions that have depended on the provisions of the Constitution, it should not be justification for throwing the Constitution away or undermine its authority," he said.

Mr Akuamoah, therefore, urged all to stand up for the Constitution and defend it at all cost "because it is the only Constitution we have".

For his part, the Deputy Chairperson in charge of Finance and Administration at the NCCE, Kathleen Addy, called on the people to celebrate the gains made since the inception of the Constitution, saying it had not been an easy journey “but we have all worked hard to sustain it”.