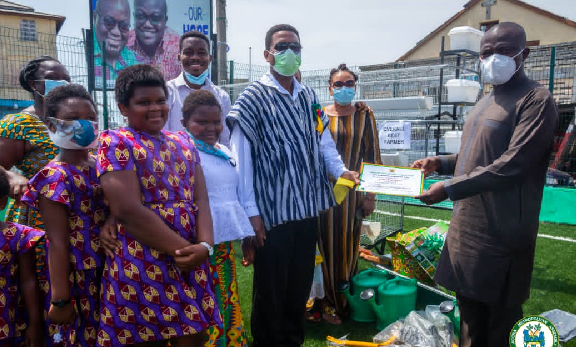 The Chief Executive of the Accra Metropolitan Assembly (AMA), Mr Mohammed Nii Adjei Sowah has called for the need for a more resilient, sustainable and inclusive food production system that would stimulate job creation.

"Agriculture until recently has always been the main driver of our national economy and will remain important for years to come. Hence it is essential to create awareness and encourage citizens to venture to into backyard farming,” he said.

To that he said the assembly's agricultural extension workers have been engaging farmers in the metropolis to promote alternative farming such as backyard and home garden practices, stating that the assembly had begun cultivating vegetables such as lettuces and cabbage on the rooftop of the City Hall.

Mr Sowah was speaking during a ceremony to celebrate the 36th edition of the Farmers and Fishers’ Day celebration in Accra on Friday, November 6, 2020.

The Metro Director of Food and Agriculture, Dr. Charles Edem Etse, who was at the event said theme for the celebration: "Ensuring Agric- business  Development under COVID-19 opportunities and challenges”  imposes a duty on all citizens to help ensure that their self-reliance encompasses agriculture.

He said to address the challenge of loss of fertile farm-lands due to urbanisation, the AMA Department of Agriculture had assisted several households to establish home gardens to which inhabitants were now consuming what their own produce.

"The days of “operation feed yourself” are back here with us again in Accra.  As we continue to intensify our efforts at encouraging a lot more people to utilise their backyards productively," he said.

Dr. Etse, however, called for the creation of cottage industries for processing to add value to the food produced to reduce post-harvest losses and enhance the incomes of farmers and fishermen.

At the ceremony, a 50 -year old Mr Richard Edwin Web,  was adjudged the overall best farmer in the Accra metropolis during the celebration. He was awarded a battery cage system, a knapsack sprayer, assorted vegetable seeds, and agrochemicals, watering can, cutlasses, wheelbarrows, a pair of Wellington boots, and spades.

The Accra Academy was also awarded the best institution in the metroplis for it's contribution towards the development of Agriculture in the city.