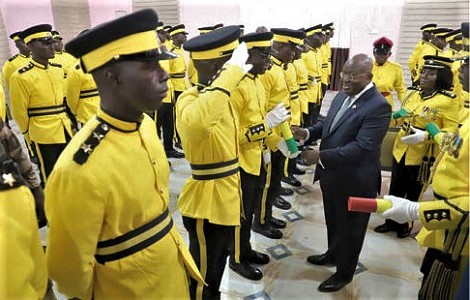 The public has been urged to open their arms to ex-convicts by accepting them back to the communities to enable them to live their normal lives and work to earn a living, President Nana Addo Dankwa Akufo-Addo has said.

He said although it was the duty of the Ghana Prisons Service (GPS) to reform and rehabilitate inmates for their re-integration into the communities, such effort would come to nought if the larger society continued to stigmatise and refuse to accept ex-convicts.

“In as much as personnel of the Prisons Service owe it a duty to work to ensure ex-convicts are well reformed and rehabilitated back to the communities, the larger society must also prepare and take responsibility to welcome and work with them, so that they do not become repeat offenders,” he added.

President Akufo-Addo was speaking at the graduation and commissioning of 198 career officers of the GPS in Accra yesterday after six months of intensive training.

The graduands comprised 127 men and 71 women with various academic and professional backgrounds.

They were also taken through rigorous paramilitary training, physical fitness and psychology.

Present at the event were the Minister for the Interior, Ambrose Dery; the Member of Parliament for Ayawaso West Wuogon, Lydia Seyram Alhassan; the Chief Fire Officer (CFO), Julius A. Kuunuor, as well as the Director-General of GPS, Isaac K. Egyir, and other high-ranking officers of the service.

The President said the government was mindful of the increasing challenges confronting the GPS in the face of society’s continuous expectations of the service to discharge completely changed ex-convicts.

He said the government was also working towards addressing issues of congestion and poor living conditions in the prisons.

President Akufo-Addo also said periodic amnesty would be granted deserving inmates, upon the advice of the Council of State.

Additionally, he said, work on the Remand Prison at Nsawam would be fast-tracked to help ease the pressure on the Nsawam Medium Security Prison, while calling for public-private partnerships in that regard.

Currently, he said, the project was 70 per cent complete, adding that it could commence operations by the close of this year.

President Akufo-Addo commended the Church of Pentecost for its decision to support the GPS with five prison camps.

He said one of the camps in Ejura in the Ashanti Region had been completed, inaugurated and handed over to the service.

Three others at Nsawam, Obuasi and Damongo were at advanced stages of completion and would, hopefully, be opened by the end of the year, while work was expected to commence on the fifth prison camp at Enchi in the Western North Region, he said.

The President charged the graduands to continue to uphold the ideals of the service, which he said were inculcated in them in the course of training.

“As new senior officers, you must bring meaning to your work and exhibit the competence required for good stewardship. Your call has come at a time when much is expected from the service, both in its domestic and international obligations,” he said.